Virtual reality has a lot of potential in the future and there are multiple ways that that future could be interpreted. The home version will likely be what it’s been with the first development kit: something that you sit or stand and play in your living room or office. But in places with more space, there’s potential for much more open environments, like the one being tested by ComputerPhile, which puts people in a large open area, wearing a wireless Oculus Rift system.

Using an original DK1 Rift, the team at Max-Planck-Institut für biologische Kybernetik in Germany, built their own positional tracking system (since they don’t have a DK2 to work with yet) and combined that with a powerful local PC and HDMI transmitter, so that they can wirelessly send the video signal to the Rift, with its cables and bits carried in a backpack by the user.

Cameras mounted on the walls handle the positional tracking, giving more accurate data for the researchers about the user’s placement. Ultimately though, it’s all so they can mess with them. The big research being done in this Holodeck like set up, is how much can they manipulate the virtual world, without the user catching on. For example, the Rift user may think they’ve walked forward, left and then right, but in reality have simply walked in a circle. Using tweaks to the virtual environment, can you trick someone into thinking they’ve done something they haven’t? 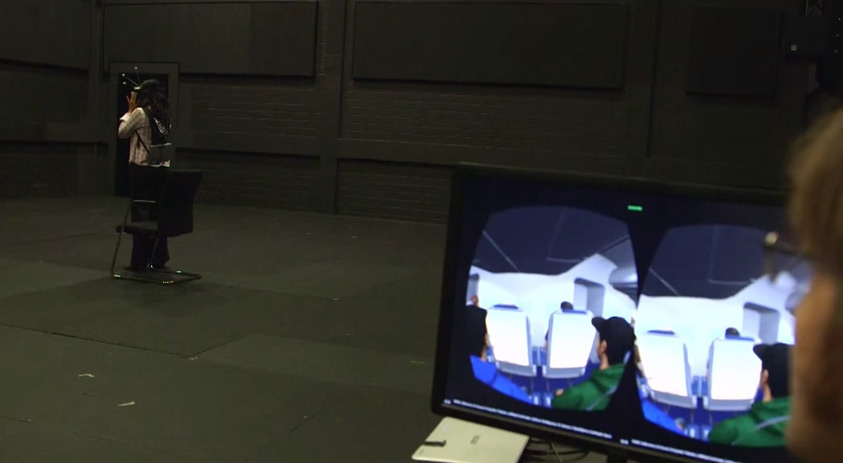 Whatever happens, you need 60 frames per second. Anything less than that and you start to feel very sick. Your brain thinks you’re poisoned, so it’s got to do something.

KitGuru Says: The idea of messing with people in VR sounds all fun right now, but I can’t help but feel the machine overlords will look back at this video and think it’s a great idea.