The Oculus Rift is obviously a fabulous gaming device and has a lot of potential once it gets past its current novelty stage, but it has much more going for it than just being an immersive display. We’ve seen before how it has the potential to help alleviate problems like lazy eye and crossed eyes, but what about phantom limb pain (PLP)? A team of developers from the University of Manchester is now hoping to find out. 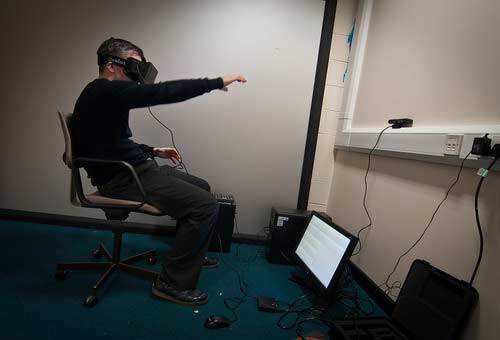 PLP is thought to be caused by the brain believing that the muscles in the missing limb are cramping. Massaging and traditional techniques obviously won’t work because there is nothing there, yet VR has the potential to help.

If it sounds ridiculous, consider that we already have a similar method of treatment using mirrors. By placing one in a position so that it mirrors a missing limb and having the patient move around the present one, it can alleviate some of the pain when they look in the mirror, since the brain thinks that the missing limb is moving.

With VR though there’s potential for much more. As the developers explain: “Using VR, we can do more than just mirror the limb. We can copy the position (so moving the real arm left moves the virtual one left), we can create a set of games rather than just boring exercises and we can easily mirror the legs as well as the arms. In addition, we can change various parameters to investigate what works for each individual.”

As it stands, what the developers have is a very basic demo that lets you bat away oncoming balls with with whatever limb you want, the idea being that as you move the arm or leg that’s present, it will move the missing one as well, calming phantom limb pain by letting your brain think that it isn’t cramped and sore.

Of course in the above set up you need more than just the Rift, you need motion tracking of the hands and legs too. In the above demo its achieved with the Asus Xtion, though the developers have used Microsoft’s Kinect in the past to similar effect.

There’s a lot of details over at the Oculus forum post if you want to read about the skinning of models and the engine behind it all, but the bottom line is: this is getting a public trial. There’s currently two functioning units in the world, one of which is staying at the Univeristy of Manchester while the other is heading to a clinic in the city for trials on actual amputees.

Kitguru Says: I doubt I’m the only one wishing this tech the best of luck. If it can make an impact in people’s lives that are already hard enough without their body reminding them that a big part of its functionality is gone, I imagine things would get just that bit easier.