Much of our coverage of the British government last year involved David Cameron’s courting of Chinese firms and how he was very interested in the filters they put up to stop citizens looking at a large variety of content, including anti-government messages. However, the big problem Mr Cameron saw in the UK, was pornography. Seeing the job of preventing children viewing it as something the government should be in charge of instead of parents, Cameron called for filters to block it on an opt-out basis. Since then, much more than just pornography has been blocked, including it seems, many critics of the war on drugs.

Now whether you agree with current drug policies in the UK, or consider the tide turning in the right direction in several US states and South America, doesn’t matter, both sides of the argument deserve to be heard. However as HuffPost points out, as many as six ISPs are blocking some of the biggest anti-drug-war websites. These include ones like Students for Sensible Drug Policy (blocked by four ISPs), Law Enforcement Against Prohibition (blocked by four ISPs), NORML (blocked by three), Americans for Safe Access (blocked by six), Clear-uk.org (blocked by three) and it goes on and on. 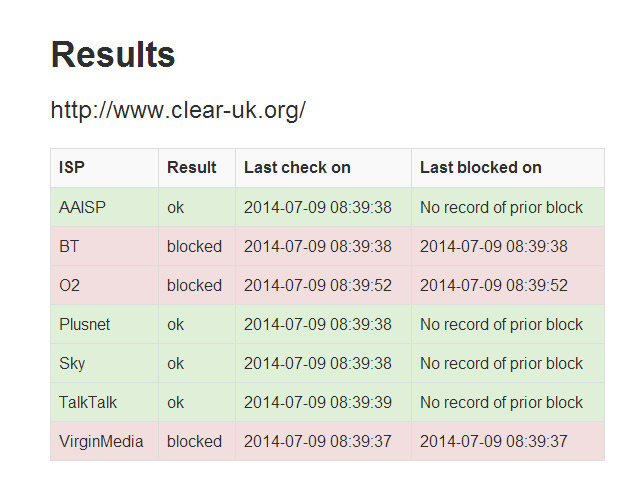 All blocks checked with Blocked.org.uk

In all fairness though, some of the pro-drug war websites have also been blocked, but by far fewer ISPs. Filters for TalkTalk blocked DrugFree and Virgin and BT Blocked LearnAboutSam, but other than that, all the other big ones are accessible on every ISP.

This may simply be a case of automated filters catching out some sites rather than others, but this is exactly the sort of censorship that we discussed when the idea of the filters was first proposed. That problem is compounded by the fact that these filters are opt-out. For those that don’t know they exist, can’t be bothered to ring through to their ISP or are too embarrassed (because they want to look at more than just anti-drug-war websites) they won’t be able to access that content without at least some passing knowledge of proxies.

KitGuru Says: On a more sinister note, it could also be entirely deliberate. If that was true, it would show the UK burying its head even deeper under the sand while the world’s drug laws change around it.