Remember SOPA, PIPA and ACTA? Those copyright enforcing, internet freedom restricting bills were set to be pushed through by governments around the world just a few short years ago, but the internet rose up like an angry swarm and swatted them aside. Unfortunately, the clear distaste the world has for these sorts of bills hasn’t perturbed the US administration from pushing for a similar piece of legislation, the Trans-Pacific Partnership. It was derailed by congress early this year, but in a new leaked document from May, Wikileaks has shown that the US is still hoping to have it signed in.

The TPP is a bill that is said to be designed to improve trade between regions. Indeed it’s a trade agreement, which is why it hasn’t gone through the usual legislative scrutiny that other bills and acts have done. However while noble on the surface, like an evil iceberg, beneath the surface lies clauses that would have a huge effect on all aspects of copyright. It would extend current medical copyrights, allowing companies to charge huge rates for their drugs for much longer. The TPP would also cement DRM laws to make circumvention far more punishable and it even gives ISPs an incentive to police what we look at online. 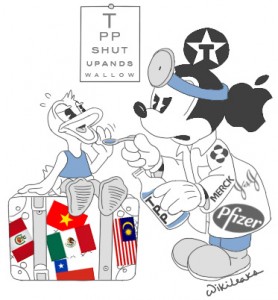 As Wikileaks points out too, this isn’t just an agreement that’s set to be signed in by the US, but many countries around the world, making up almost half of the planet’s GDP. Involved countries are: United States, Japan, Mexico, Canada, Australia, Malaysia, Chile, Singapore, Peru, Vietnam, New Zealand and Brunei. Funnily enough though, most politicians aren’t even given access to the full documents, so may not even be able to find out much about what it is they’re signing on for.

“The selective secrecy surrounding the TPP negotiations, which has let in a few cashed-up megacorps but excluded everyone else, reveals a telling fear of public scrutiny”, said Wikileaks founder, Julian Assange. “By publishing this text we allow the public to engage in issues that will have such a fundamental impact on their lives.”

The next debate on TPP policy is set to take place in Canberra, Australia on the 19th October. There will also be a ministerial meeting to discuss it further, in Sydney between the 25th and 27th October.

KitGuru Says: If you live in one of the TPP affected countries, write to your local politician and ask them not to support this trade agreement. They may not even be aware of it.