Kim Dotcom recently hosted the first meeting of Internet Party members in his own front garden, calling it the Internet Party Picnic. It ended up drawing in over 700 of the parties first members, where pictures were taken with the MegaUpload founder and with his giraffe sculpture and of course many a dip was taken in the pool, but beyond the frivolities, it was the politics that the meeting was all about, which is where Kim Dotcom's address comes in. 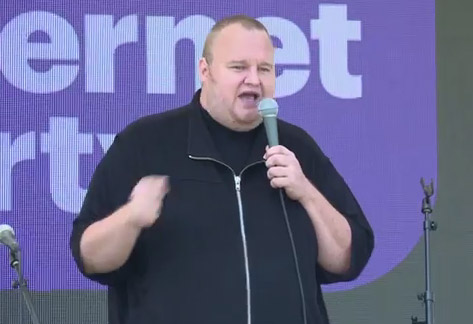 Fortunately for the rest of us, several videos of the event are now online. It starts off  light with Mr Dotcom introducing himself and the party, along with a little crowd work:

While no one would suggest Dotcom was the world's greatest public speaker, you have to admit, the idea of making a government catch up with the technological pace of civilian life is very nice.

Next he went after the education, suggesting that creating generations of indebted students was wrong and that ultimately, education should be free:

From there, Dotcom addressed protecting the internet, the creation of new jobs, better broadband commercial infrastructure to give customers better choice and the introduction of what he terms, “crowd sourced politics,” which means party policy with be editable by all. Anyone can tweak ideas and offer up their thoughts on improving the party and its plans for the future.

KitGuru Says: While a lot of political speeches are rousing and designed to get you pumped up – so we'll have to see how Dotcom's party actually addresses these issues – it's hard to not agree with a lot of Dotcom's points here. What do you guys think?