When Benjamin Yeh joined Asus back in 2003, ATI was still around and its 9800 All-in-Wonder was a popular choice with enthusiasts who knew how to unlock extra pipes. At the same time, nVidia was refining its 5000 series while preparing to reveal the Shader Model 3-enabled 6000 series.  The world has changed a lot since then, and for Asus it seems to have been one success after another. KitGuru was recently given exclusive access to Asus Director Benjamin Yeh, to discuss the company, its products and future.

Even an enthusiast would struggle to cover the floor of their living room with mainboards. Getting from one end of your street to the other, in mainboards, would probably take all the boards ever bought by you and all of your mates. Getting across town might need all the mainboards ever owned by everyone you’ve ever met/shaken hands with/seen on TV.

Now imagine not only crossing your town with mainboards, but then heading out to the next town – across the city – out into the countryside – down the motorway at 70mph – through the next city, to the ocean and then get a boat and keep going. Line up all the mainboards that Asus has produced since 1989 and it would actually go right round the world. And again. And again. And you would still have some left over. Now that’s what we call a lot of mainboards. And that’s not the only thing that the company makes. So how big is the company ?

We ask Benjamin about how many people now work for Asus, “Right now, globally, it’s around 11,000”. And how many of those are engineers?   Benjamin smiles, “More than 3,000 people at Asus are research engineers. Having a strong engineering team, because it is the key to both innovation and perfection”.

KitGuru readers will know just how complex modern graphic cards and mainboards can be. But you might be surprised to learn where the majority of Asus’ revenue comes from these days. Benjamin explains, “Right now, around 75% of our global turnover comes from system products. That includes tablets, netbooks and notebooks”. That’s a big slice of any pie.

The launch of the EeePC at Computex in 2007 caught everyone by surprise. Asus spotted that ‘price point’ had become crucial to a large section of the market and that by underclocking an Intel Celeron M from 900MHz  to just 630MHz, using 4GB of memory as the hard drive, removing the optical drive and running a simple version of Linux as the OS – it could create a new product class.

Creating a new class of product is serious business. Sony did it with the Walkman, Nintendo with the Gameboy and Apple with the iPad. It isn’t easy.

Benjamin sums up the feeling within Asus in 2007, “Originally we didn’t expect creating a brand new product category. In fact, we were a bit worried about product positioning/brand positioning because of the lower price point. Obviously, now we are very happy about the outcome. Bringing such an innovation to the market is what we have been continuously striving to do for more than 20 years”.

Benjamin is obviously a realist, “We have many new ideas every year, some enjoy great commercial success, some not. That is the nature of innovation. But even when things don’t work out exactly as we hoped, it doesn’t change the fact that we continuously push at the barriers – to see what is possible. That is the Asus way”.

OK, so 75% of the company’s revenue comes from complete systems, so where does that position Asus in the world?

“ASUS is now a global top 6 company in the portable PC market and number 3 in Europe”, said Benjamin. Impressive stuff considering Asus was nowhere on these charts before pioneering the netbook in 2007.

KitGuru asked Benjamin about his first PC, “Since moving to the UK at the end of 2009, I’ve noticed that it is not unusual for every member of a household to have their own device. Whether it is a netbook, notebook, desktop PC or tablet, they are everywhere. When I was growing up, in my family we had a single 286 PC that was shared between everyone. I still remember being fascinated by the early PC games”.

So does Benjamin still play games? “These days, as Regional Director for Asus in the UK and Nordic countries, I have a team of 35 professionals running everything from sales and support through to marketing and logistics. I really don’t have much time left over”.

“I do love going to LAN parties, it makes me feel very nostalgic for my CRT days. Recently, I managed to play Diablo on a top of the range Asus G73 and it was amazing. Thinking back to my 286, it shows you just how fast this market moves”, said Benjamin. “In the old days, having a 16-bit soundcard, CD ROM drive or simple speakers was a major upgrade. Now some Asus notebook models even come with EAX, THX and Blu-Ray as standad. We even offer advanced features like 3DTV Play on the more serious models”.

So is Benjamin a technologist, marketing person or business manager?

“I majored in International Business in university and I have used computers since I was a child, so it was quite natural for me to enter this industry”, said Benjamin. “I love computers anyway and Asus is the market leader. Being given the chance to join was a great opportunity”.

Benjamin’s English is great, but how many languages does he speak ?  “Well, Mandarin and Taiwanese are my mother tongues and, alongside English, the time I have spent working for Asus in Spain and France means I can get by in those languages as well”. Impressive stuff.

Lastly, we wanted to get a handle on where Benjamin sees the future for Asus, what is he most looking forward to?

“I know that we will continue to push hard on graphics and mainboard technologies, but the one that excites me the most is the Tablet PC”, said Benjamin. “It brings the possibility of an interconnected world. The idea that all of your work and media and friends are available to you, whenever and wherever you are. That kind of application of technology really is the future”.

KitGuru asked for product specifics. Benjamin smiled, “We have launched our new tablet range, the Asus Transformer, here in the UK at the start of April. What sets it apart from older products in the market is the unique docking station, which looks like a keyboard. It transforms the tablet into a netbook. The docking station also provides an additional 8 hours of battery life – taking the total to 16 hours. It also adds additional capabilities like additional USB, SD memory ports and more”.

“In terms of operating system, it was the first commercially available Android Honeycombe product in the world”, said Benjamin. “The TF101 is a really cool product”.

“While we do focus on creating desirable designs, ASUS is truly an engineering oriented company. It is in our company DNA, not only in research development team, but also in sales and marketing”, explained benjamin. “The company culture starts from the top – from the very beginning. Both our chairman and CEO are top engineers themselves and their way of thinking, their approach, carries through to every member of staff”.

KitGuru says: Benjamin’s not wrong about the Asus engineering approach. We noticed a customer complaint about the G73 on the KitGuru forum on 27th April and, within 24 hours, Asus made contact with a fix. That’s the kind of service you expect from small, local stores – not multi-national, multi-billion dollar corporations. The images of new and different Asus products seen in this interview, were all snapped in the private room at CeBIT. It gives an idea of just how diverse a range of products Asus is working to deliver.

Previous Android already has more free apps than the Apple App store
Next Apple to use AMD 6 series GPU in upcoming iMac range? 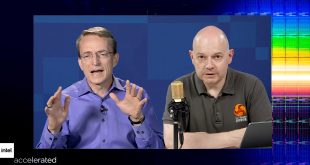 We had big news from Intel this week, with the company unveiling its new process node roadmap and outlining plans to regain the process performance leadership crown by 2025. We've heard from Intel, now let's see what Leo thinks...