Intel pulls the plug on the Intel Developer Forum

It was a great run, but Intel Corporation has announced it has pulled the plug on the Intel Developer Forum (IDF). This has left many in the industry with a huge gaping hole in their mid-August agendas, as the staple Intel-branded event now disappears into posterity.

The Fall edition, regularly held at the Moscone Center in San Francisco and scheduled for August 15 through 18, 2017, has been cancelled after 20 years of non-stop actual newsworthy content.

During the past two decades, IDF had been the go-to show for all things Intel – as a journalist you could get in on workshops, masterclasses, demos, get unsuspecting Intel employees on the record without their handler, and even get some insider info on tech that was still under wraps. Others found the event equally valuable, as analysts, partners, customers and the competition made a point of visiting. The event, in recent years, had evolved into the China (Spring)/USA (Fall) format that we’ve become familiar with, although it had also been held in locations such as São Paulo, Brazil, Mumbai in India and Taipei in Taiwan. It had gained such importance, that AMD targeted it for its own brand of “guerrilla marketing” by hijacking Intel guests into a suite across the road and doing their own presentations. 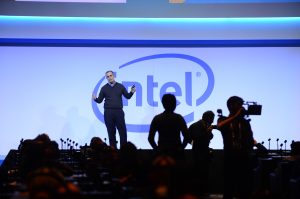 The announcement on the IDF website states, “Intel has evolved its event portfolio and decided to retire the IDF program moving forward. Thank you for nearly 20 great years with the Intel Developer Forum! Intel has a number of resources available on intel.com, including a Resource and Design Center with documentation, software, and tools for designers, engineers, and developers. As always, our customers, partners, and developers should reach out to their Intel representative with questions.”

This suggests Intel events will refocus (as they already started with sponsorships and themed events such as MWC), but leaves one pressing question: considering the weight IDF held on the tech community calendar, who will step in to fill up the slot left open by the cancellation?

KitGuru Says: IDF has been a great source of information for analysts and journos alike for Intel-related previews and demos, and leaves a huge gaping hole in the event calendar for both Spring and Fall. Other Intel-sponsored shows with a more focused approach will step in, we believe, but nothing as all-encompassing as IDF.

Previous Star Citizen’s huge 3.0 Alpha update set to launch in June
Next ASUS is giving away Dawn of War III with some of its GPUs, mobos, monitors and more