Prototype contact lens which could monitor glucose for diabetics

Diabetes is a problem that many millions of people suffer from. Various reports online show massive growth rates over the last 30 years and Bloomberg published a story in September last year detailing the epidemic that hit China. Over 11 percent of adults in China, or 114 million people are suffering from the disease.

In the United States reports indicate that diabetes suffers have doubled in the last decade, with Type 2 accounting for 90-95% of the diagnoses. This accounts for around eight percent of the total American population and it is said that 27% of people do not even know they have it.

Monitoring blood glucose levels is extremely important and needs to be handled several times a day. This can be both very painful and time consuming. Google may be coming to the rescue however, with a new prototype contact lens which can retrieve details about blood sugar levels directly from the eyeball. 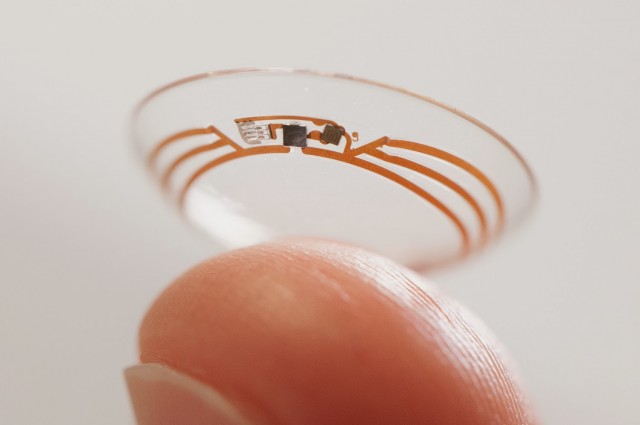 Google say “Over the years, many scientists have investigated various body fluids—such as tears—in the hopes of finding an easier way for people to track their glucose levels. But as you can imagine, tears are hard to collect and study. At Google[x], we wondered if miniaturized electronics—think: chips and sensors so small they look like bits of glitter, and an antenna thinner than a human hair—might be a way to crack the mystery of tear glucose and measure it with greater accuracy.”

This contact lens has been equipped with a micro scale computer chip, sensor and antenna. Once every second, the sensor will monitor the persons glucose levels in the tears and then transmit the statistics to a wireless device, such as a smart phone or tablet. The information can then be read by the person, or more importantly, a doctor. Google claim that future prototypes may include a small LED which could alert the person to a problematic sugar level which is too low, or high. The contact lens has been designed not to interfere with eye sight at all and should work just like a traditional contact lens.

Kitguru says: Google Scientists are chatting with the FDA in the effort to take the prototype to the next stage. Even if approval goes through  it may be years before the design reaches the public domain.