Although one of the common ways sci-fi writers like to make their planets more exciting is adding a second sun to the mix, it's not something we're ever likely to experience here on Earth. However our ancestors might have, as 70,000 years ago, another star did a fly-by of our solar system, passing closer to Earth and our host star than any other.

This star wouldn't have been a massive glowing ball in the sky though, but a slightly brighter pinprick, as although it passed in relative proximity to us (as far as the universe goes), it was still a long way away. The red dwarf, known as Scholz's star, only game as close to us as passing through the Oort cloud which surrounds our solar system. This spherical shell of icy objects extends from around 1,000 AU (one AU = the Earth's distance from the sun) to as much as 100,000 AU; though we don't know for sure, as the Voyager 1, the furthest man-made object from us, has only travelled 100 AU in nearly 40 years.

Still, at its closest it was probably around 0.8 light years away. Considering our current next-nearest star, Proxima Centauri, is 4.2 light years away, that's significantly closer. 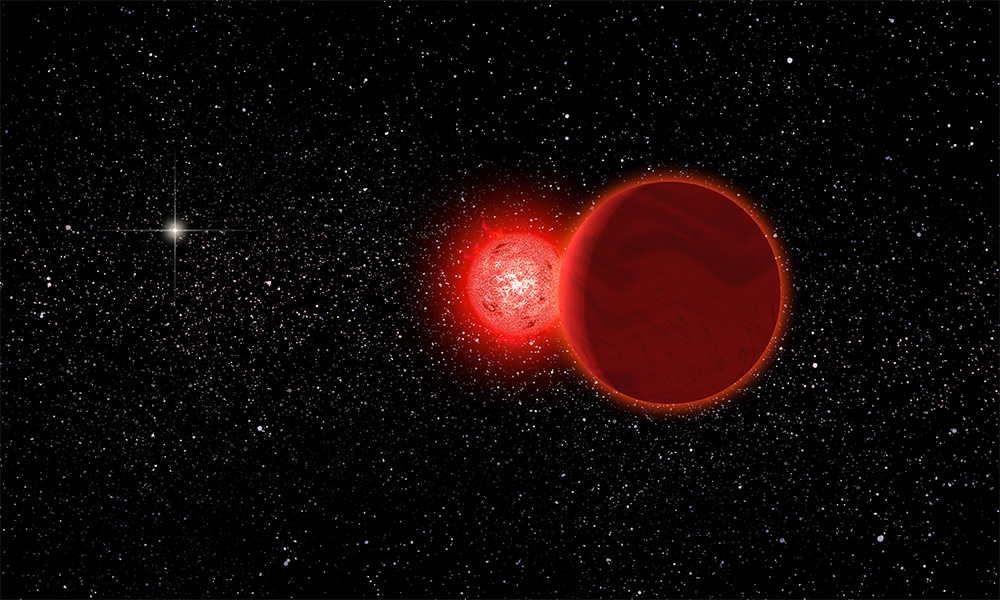 In this artist interpretation, our Sun is the bright star on the let and may have been how Sholz's star appeared at a distance

Scholz's star would have had quite an impact on whatever is out there though, as it not only brought its own gravitational mass with it, but a brown dwarf (a mass larger than a planet, but not large enough to lead to fusion in its core) too, which travelled with it.

However, we can't expect either to return to our solar borders any time soon. Currently the pair are speeding away from us and are already 20 light years distant. Astronomers were able to study its movements to determine that it was travelling along a relatively straight trajectory, suggesting a future or past fly-by. Ultimately they decided that it was travelling away, due to its radial velocity. Tracing back where that meant it came from, lead them to the understanding that our ancestors may have had seen a slightly brighter star in the sky when they looked up at night.

For more information on the star and its travels, the full Astrophysical Journal Letters are available here for a few pounds.

KitGuru Says: Considering how permanent the skies seem to our short lives, it's amazing to think that our ancestors may have looked up at one that was quite different.