Since the official NASA update to Kerbal Space Program, many people around the world have gotten their taste for how difficult it can be to land on anything smaller than a planet in the game, making it even more impressive that we’re looking to do the same thing in real life in the next few years. However sometimes the universe makes it a little easier for us, by simply crash landing the little stellar bodies into our own blue marble, like the meteorite that crashed near the Nicaraguan capital, Managua, on Saturday.

At least that’s the rumour going around on sites like the BBC. NASA however is hesitating to confirm a crash landing, as it is still waiting on eye witness reports to see if any of the tell tale signs of a meteorite impact were present at the time of the supposed crash. It’s looking to find out if there was a “fireball flash,” or a trail of debris. 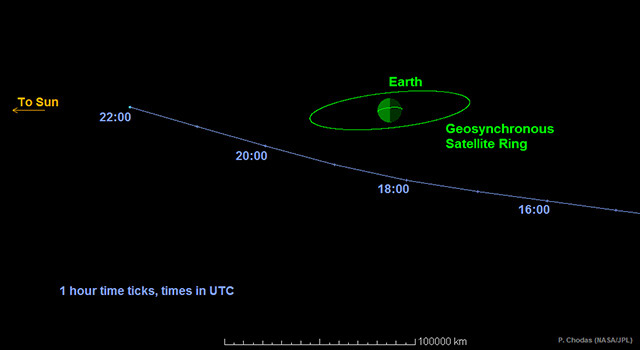 2014 RC passed the Earth at a relatively close proximity, of 1/10th the distance to the moon

Some local scientists in the region have speculated that if it does turn out to be a meteorite, then it could have from a near pass of small asteroid 2014 RC, which passed quite close to Earth on the 7th September. However, the impact was said to take place around 13 hours before the nearest flyby, leaving some at NASA to suggest that the events are totally unrelated.

Other speculation suggests that the crater, which measures some five metres deep and ten metres across, could simply be some sort of explosion. There is some potential for that theory to be correct, since the site is near an air force base and a major airport. However Nicaraguan authorities are convinced it wasn’t and was indeed an impact from a part of a stellar object.

KitGuru Says: Presumably we’ll learn more once samples have been taken from the local area. If it does turn out to come from 2014 RC, it would be impressive, considering the closest the asteroid was said to get to Earth was 20,800 miles from the surface.

Previous Intel teams up with Fossil for smart, wearable electronics
Next LoL Pros back in spotlight with Road to Worlds documentary