Home / Channel / Science / NASA to use smartphones for robotic intelligence

NASA to use smartphones for robotic intelligence

In just three days time, NASA is set to send a handful of Android smartphones into orbit, with plans to dock with the International Space Station (ISS) and deliver supplies. However those smartphones will do more than just let the astronauts get a quick game of Angry Birds in before bed time, as they’re going to be installed in robotic Spheres that could one day become the first ISS maintenance droids.

We’ve seen them in movies and TV shows for decades, whether you’re watching Star Wars or Red Dwarf, there’ve been robots that help out the space-men with menial tasks. However it’s the former of those productions that proved to be the most inspirational, as the Spheres that Luke Skywalker fought against were direct inspiration for NASA’s own developments here.

The Spheres were sent to the ISS back in 2006, with little more than basic hovering functions. Now though they’re set to be upgraded with the space-faring smartphones, giving them the ability to see in 3D, communicate with satellites and significantly upgrading their processing power. 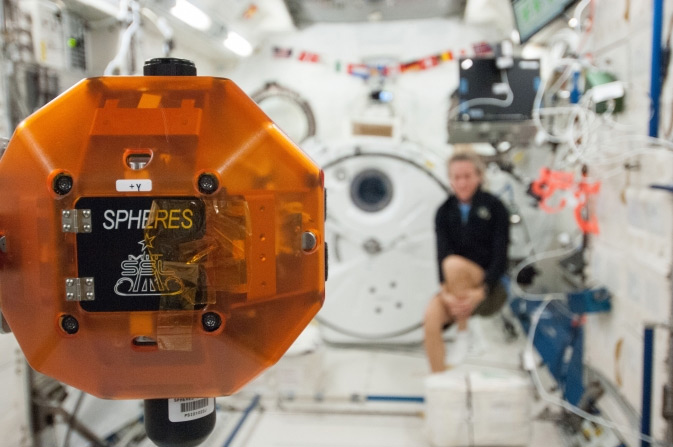 One of the not so spherical “Speheres,” seen here after its battery terminal was repaired

It’s thought that in the future, these Spheres could not only document daily activities on the ISS, but could also perform routine but dangerous maintenance tasks outside of the station, thereby reducing the number of space walks, or EVAs that astronauts need to take on.

KitGuru Says: It’s about time we got some robot spheres on our side. They’ve been our enemies in everything from Portal 2 to Phantasm, so the least they could do is help fix our spaceships.