Quick, name three dinosaurs. Ok here’s mine: T-Rex, stegosaurus, triceratops. These (along with Iguanodon in a close 4th) were the dinosaurs I loved the most as a kid and chances are, each of them with their very distinctive and different looks, will be on most of your lists too. However, now as an adult, my pre-historic vocabulary is a bit bigger and I understand that these dinosaurs were part of their own groups. Triceratops for example, was a member of the ceratopsid family and he’s just gotten a new cousin to play with, as scientists have discovered a brand new, frilled leaf eater.

Mercuriceratops Gemini is it’s name and while still sporting three horns like our tri-named pal up there, his were much shorter, though his frill was much larger and more decorative. Looking at the bones dug up by scientists in Alberta, Canada, they’ve been able to deduce that Mercuriceratops lived around 77 million years ago, was about six metres long and weighed upwards of two tonnes. 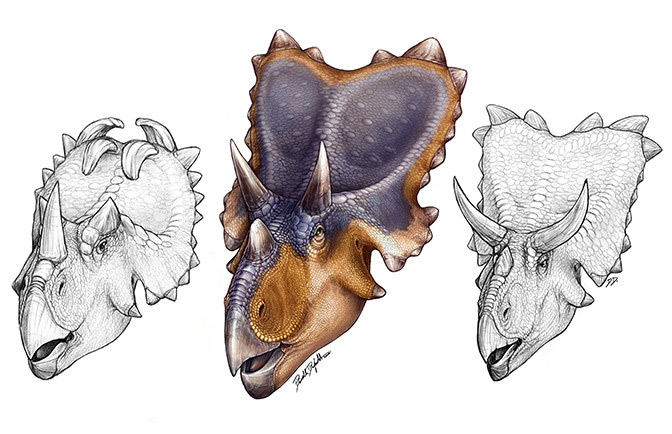 Its name means “mercury horned-face,” due to similarities between the wings on the helmet of the God Mercury and the large frill of the dinosaur. While similar species have been found elsewhere in the world, with parrot beak-like mouths and three horns, Mercuriceratops has the interesting mutation of a giant frill, presumably used for display, rather than combat.

While initially thought to be for protection only, the large frills found behind the head on ceratopsian dinosaurs are now thought to not be strong enough to offer armoured protection against bigger predators. Instead they may have offered a dual purpose, potentially for attracting a mate, regulating blood flow, or potentially allowing for the attachment of large muscles for chewing or some other means.

Of course due to the method of discovery, we may never know as muscle fragments are notoriously hard to find in a fossilised state. Completed skeletons just as much in some cases, as in this one scientists are basing their findings off of two skull fragments, which have been extrapolated to give the predicted shape and size of the animal.

KitGuru Says: When I was growing up, all I wanted to be was a palaeontologist. I still think it sounds like quite a romantic, adventurous profession, but I certainly imagined digging up giant skeletons, rather than fragments.