With just a few short hours of battery life left on the Philae lander craft that recently touched down on comet 67P, the European Space Agency (ESA) has announced that it's begun drilling into the surface of the interplanetary body. The plan is to try and retrieve some material from the comet's sub-surface and analyse it before running out of power. Ideally, the ESA also wants to attempt a ‘hop' that could put Philae into a more sunny position, but nobody is getting their hopes up too much.

The reason for these somewhat precarious manoeuvres, is because the ESA doesn't have much of a choice. Thanks to failures of both the landing thruster and the harpoon tether system – both of which were designed to help pin Philae against the comet's ‘surface' – the little lander bounced over a kilometre back into space after its initial landing, before being drawn back in by 67P's minute gravitational field. It then bounced again, much more lightly, before coming to rest.

While it was great news for the ESA that they had officially landed on a comet, with images and other data soon coming streaming back through the cosmos to show us just what a comet looks like up close, it was thought that Philae may actually be on it side, up against a cliff-face. This means that the lander only receives about an hour and a half of sunlight every 12 hour rotation of the comet, which isn't enough to recharge its batteries sufficiently. 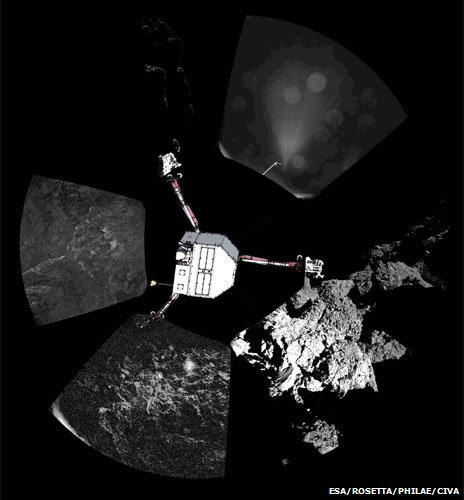 These are some of the images Philae has taken, arranged around a rendering of the craft to show its potential positioning

When launched towards the comet, Philae had 60 hours of battery life and now it's burned through almost all of it. With just a few hours remaining, the ESA is now going all out to try and complete the most important experiments, like analysing sub-surface samples of 67P – before the last ditch effort to move Philae.

To this end, the ESA has extended the drill to its full 25cm, as due to Philae's positioning, there is no guarantee it will even come in contact with the comet itself. If it is successful however, the material will be heated in specially designed ovens, before being analysed. Fingers crossed if that happens, the data makes it back to earth before the battery runs out.

Whatever happens however, today is likely the last time for a while that scientists will be able to contact Philae. Whether it is able to hop away or stays where it is, scientists will put it into hibernation like they did for three years as part of its historic journey. From then, it's a case of hoping that it is able to recharge over the next few weeks and months, to the point that it can become operational again and tests can be resumed.

KitGuru Says: As sad as this is, considering the failures, Philae has done a remarkable job and has sent us back data that will be pored over for months and years to come. This is the sort of thing that makes you proud to be human.