Although NASA has continued to wow the world with its efforts in sending robots to Mars and planet discovery, it's Elon Musk's Space X that has captured many people's imaginations this year, with the continued push for a re-usable first-stage Falcon rocket using an automated drone platform. While the last effort didn't quite go as planned, the billionaire CEO recently announced that in another test they had managed to ‘soft land' the rocket in a vertical orientation just 10 metres form its target, suggesting that a full recovery could be possible in the next drone ship trials.

The latest test of the drone ship was supposed to take place yesterday, with the launch of the new Deep Space Climate Observatory, which now in orbit, should be able to provide us with a 15 to 60 minute warning or any major solar storms that could seriously affect much of the technology we use on a daily basis, as well as more sensitive instruments. Sending it up, was the Space X Falcon 9 rocket, which as per its previous runs, was able to seperate at a pre-orbital velocity and use fins and a reignition of its rocket booster, to slow its descent back to Earth.

The plan was for the automated-drone barge to be ready and waiting for the rocket when it reached sea level, but unfortunately due to what Musk described as a “Mega storm,” it couldn't maintain its position and had to return to safe waters. In its absence, scientists at Space X tried to improve on previous efforts with the controlled descent and were able to bring the rocket down for a soft-landing on the water, only 10 metres off the mark. 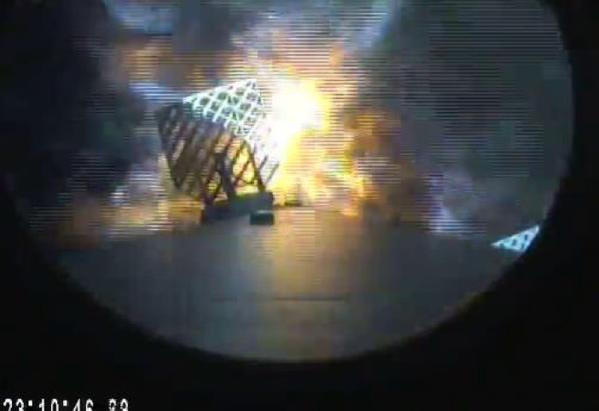 Musk posted an images of the rocket touching down in the broiling ocean.

This is a significant achievement and suggests that next time, the Falcon rocket will be able to land directly on the platform in a stable, vertical position. Previously it came in at too steep an angle and exploded on impact.

To make the next mission's success guaranteed, Musk said there are plans for an upgrade to the drone-barge, meaning it should be able “to handle literally anything.” He even joked that they would give it a “Merlin [engine] for good measure.”

KitGuru Says: Congratulations to Space X. I eagerly await the video footage of when the rocket booster stage can touch down safely. The amount of money the re-use of such hardware will allow, could usher in a whole new age of space travel.