Commercial space organisation, Space X, attempted a frequently delayed unmanned mission to the International Space Station on Saturday, delivering supplies and important cargo to the orbiting station for the first time in months. While the launch itself went off without a hitch, the big scientific experiment with it was to see whether the first stage of the rocket could be landed safely on a sea-barge to allow for the re-use of certain parts which could bring down costs. Unfortunately, the landing was simply too hard. 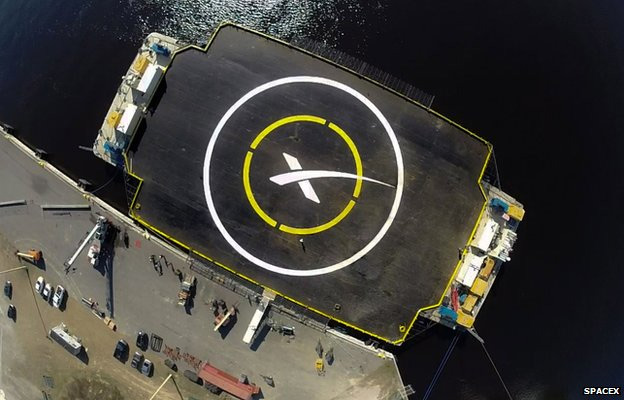 Elon Musk, CEO of SpaceX tweeted shortly after the rocket's launch, “Rocket made it to drone spaceport ship, but landed hard. Close, but no cigar this time. Bodes well for the future tho.” He went on to state that some of the safety equipment on the unmanned barge would need to be replaced, but that ultimately it wasn't too much of a failure.

In-fact, while it sounds from his description that the Falcon 9 rocket stage did hit hard enough that little will be reusable, the fact that it was able to accurately target the barge at all is a great achievement. Previous tests have given the rocket stage a margin of error up to 10 kilometres wide, having it hover above the ocean before cutting power and crashing into the water. In this instance, Space X was trying to land the large rocket booster and fuel tank on a platform just 300ft by 100 ft and it sounds like it did that, but just didn't slow down enough.

All of this was possible because of the unique design of the Falcon 9 booster rocket, which is able to reignite its engines after stage separation – after sending the payload and its smaller engine(s) and fuel reserve into an orbital trajectory – and uses that power combined with fins to control its descent. It also has landing legs, which is unusual for a first stage booster.

The point of this is to make the rocket as reusable as possible, which can therefore make it much cheaper to operate – since the engines don't need to be rebuilt for each launch. Whether everyone that wants to hire Space X for trips into a near earth orbit will be happy to use a second-hand rocket, remains to be seen, but that's a bridge to be crossed when it is actually possible to recover the rocket. No doubt this latest test will just be one of many going forward.

KitrGuru Says: It's interesting to note that while the US shuttle program was able to re-use the shuttles themselves, the complexity of their engines and the amount of parts that needed to be replaced, ultimately led to little financial gain to their recovery. The Falcon 9 on the other hand, could save a lot if safely returned.