There might be nine planets in our solar system after all

No Pluto, it's not you. Go back to being the marvel of our recent far-flung photographic efforts. Astronomers do think there might be a ninth planet in our solar system though, but way beyond even the bounds of our dwarf-planet friend. We haven't seen it yet, but evidence in the Kuiper Belt suggests that a world 10 times the mass of the Earth could pass through a highly elliptical, 20,000 year orbit.

The hint of the very distant world was discovered by the California Institute of Technology, which finds the alignment of several bodies within the Kuiper Belt rather suspect. The Sedna and 2012 VP113 minor and dwarf planets are lined up in a fashion that suggests they are being influenced by the gravity of a much larger body, somewhere out there. 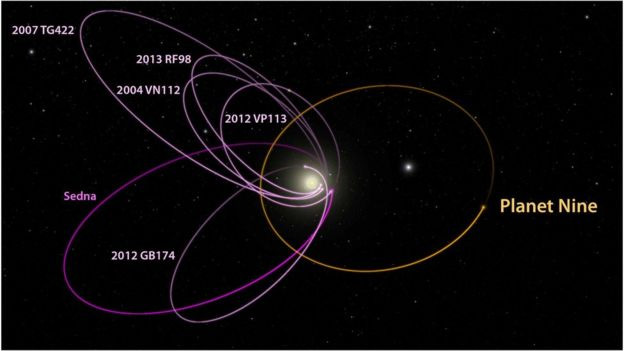 “The most distant objects all swing out in one direction in a very strange way that shouldn't happen, and we realised the only way we could get them to swing in one direction is if there is a massive planet, also very distant in the Solar System, keeping them in place while they all go around the Sun,” said astronomer Dr. Mike Brown (via BBC).

This of course isn't the first (or likely the last) time that someone has suggested there may be another planet beyond the bounds of our currently named worlds. This is the most promising evidence so far though and many astronomers will now be swinging their telescope to a certain spot in the sky where it is thought likely to be, to try and catch an elusive glimpse of it.

Brown too has a history of finding far-flung objects. He was part of the team that helped downgrade Pluto after the discovery of dwarf-planet Eris in 2005.

KitGuru Says: Goddamit. I'd just gotten used to the idea of eight planets and now it might change again? Space is so inconvenient sometimes.