Like any case which is designed with superior acoustics in mind, the Deep Silence 2 features sound-proofing material on the inside of the side panels. In this instance, the material used is thin foam. This feels like a bit of a cop-out when compared to the more substantial bitumen-like material used by Fractal Design.

The inside of the case is painted entirely in black, meaning it will complement most component choices aesthetically. Despite Nanoxia labeling the Deep Silence 2 a mid-tower case, it is actually somewhere between a mid-tower and a full-tower in terms of size. This means that there is plenty of room to work with inside the chassis.

Over on the right hand side of the case there are seven internal drive bays which can either be populated with 2.5” or 3.5” drives. These require screws to install the drives and are very similar in design to those found in Fractal Design’s cases.

These aren’t fully tool-less drive bays as screws are required to secure both 2.5” and 3.5” drives into the trays.

Installing a motherboard into the case is fairly simple, although the stand-offs aren’t preinstalled and can be a bit of a pain to screw into place before securing the motherboard down.

Nanoxia has included some padding around the power supply mounting points, presumably to help reduce noisy vibrations. The power supply is still installed in the usual fashion, though, using four screws through the back of the case.

Installing the graphics card into the system is made extremely easy by the large amount of room to work with inside the case. The graphics card secured into place using two thumbscrews, but we would recommend tightening these with a screwdriver to make sure they don’t come loose. 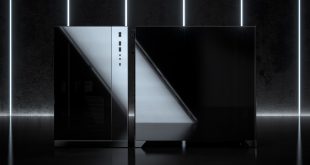