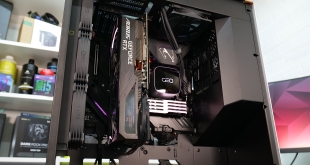 When reviewing stacks of cases as we do at KitGuru, throughout the year we tend to see a lot of the same design elements over and over again. Maybe the odd RGB fan is included here or the odd bit of tempered glass there, maybe even a new airflow front panel perhaps. But when something that genuinely looks new and interesting passes through the KitGuru office we get a little bit excited. Thankfully, today is one of those days when we get to look at a brand new PC case from a new company, but will it impress? Let’s find out.

Geometric Future is a new name to the European PC building enthusiast market but it already has some interesting hardware on offer, it's worth checking out their website to learn more. The latest release from Geometric Future is the Model 8 chassis series which is available in various configurations. We chose the Model 8 CowBoy for this review; however, all of the model 8 series share the same chassis structure but with various external aesthetics to choose from.

The Geometric Future Model 8 CowBoy is available to purchase from Amazon UK, the case is priced at just under £170 in the UK but for that, all you get is a bare-bones case, there are no fans, fan controllers, no RGB to speak of or any additional accessories bundled with the case. So this must be factored in when budgeting for your build if you are thinking of using this case.

To simulate thermal demand we run the Cinebench R23 multi-thread benchmark and 3DMark Time Spy Extreme stress test simultaneously in a loop for 60 minutes to fully load the system. This gives the CPU and GPU enough time to reach constant steady-state temperature. With this data, we can compare how the system handles the thermal demand and measure peak noise levels.

Thermal performance is measured with the case in various configurations, such as the default, with the tempered glass left-hand side panel removed and with the front panel removed to see how these configurations affect the CPU and GPU temperature. During testing, only stock case fans are used unless otherwise specified. All water pumps are set to maximum RPM and fans are set to a custom RPM curve by the Motherboard software/BIOS. 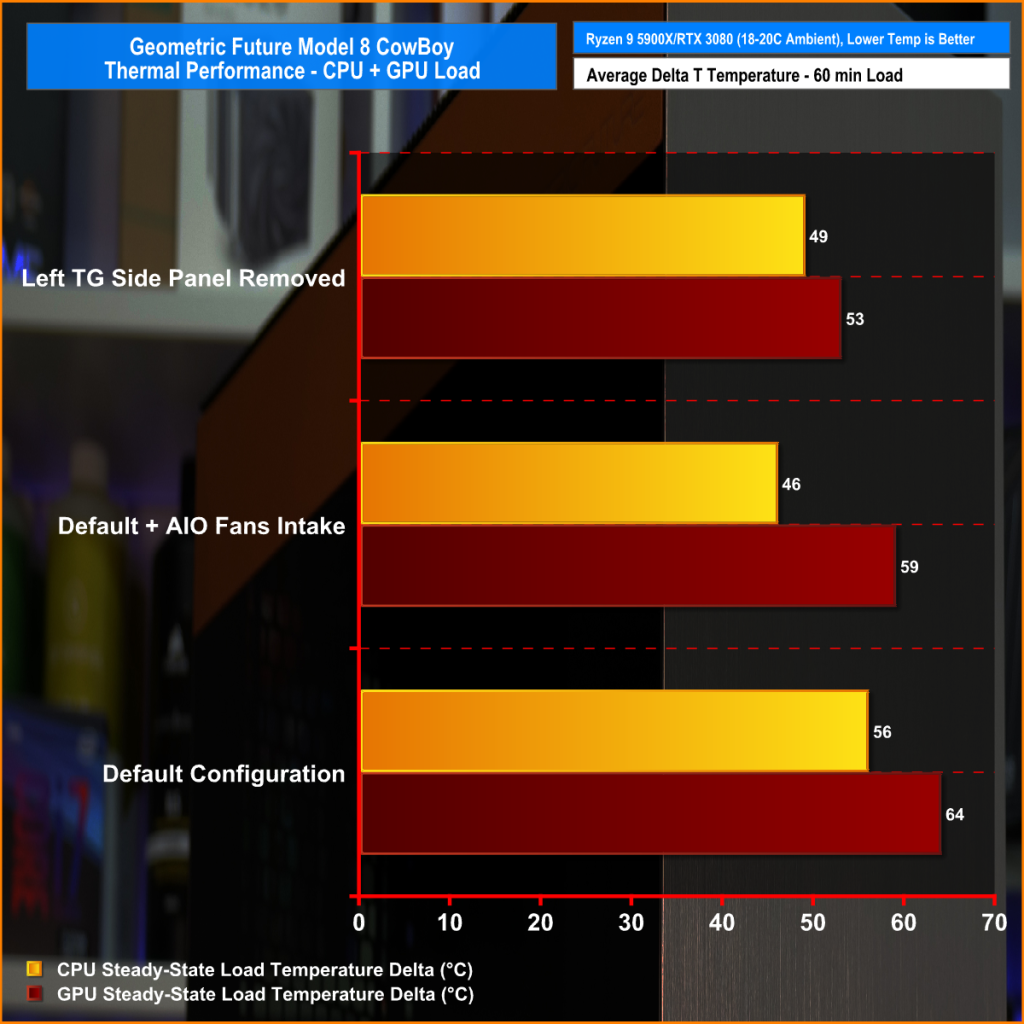 During the build, I was concerned that the AIO and GPU would conflict in terms of airflow since the fans were pulling in opposite directions. This concern was a valid one as the optimal cooling configuration is to have the AIO fans flipped around, pulling air into the case from the rear and blowing towards the GPU. 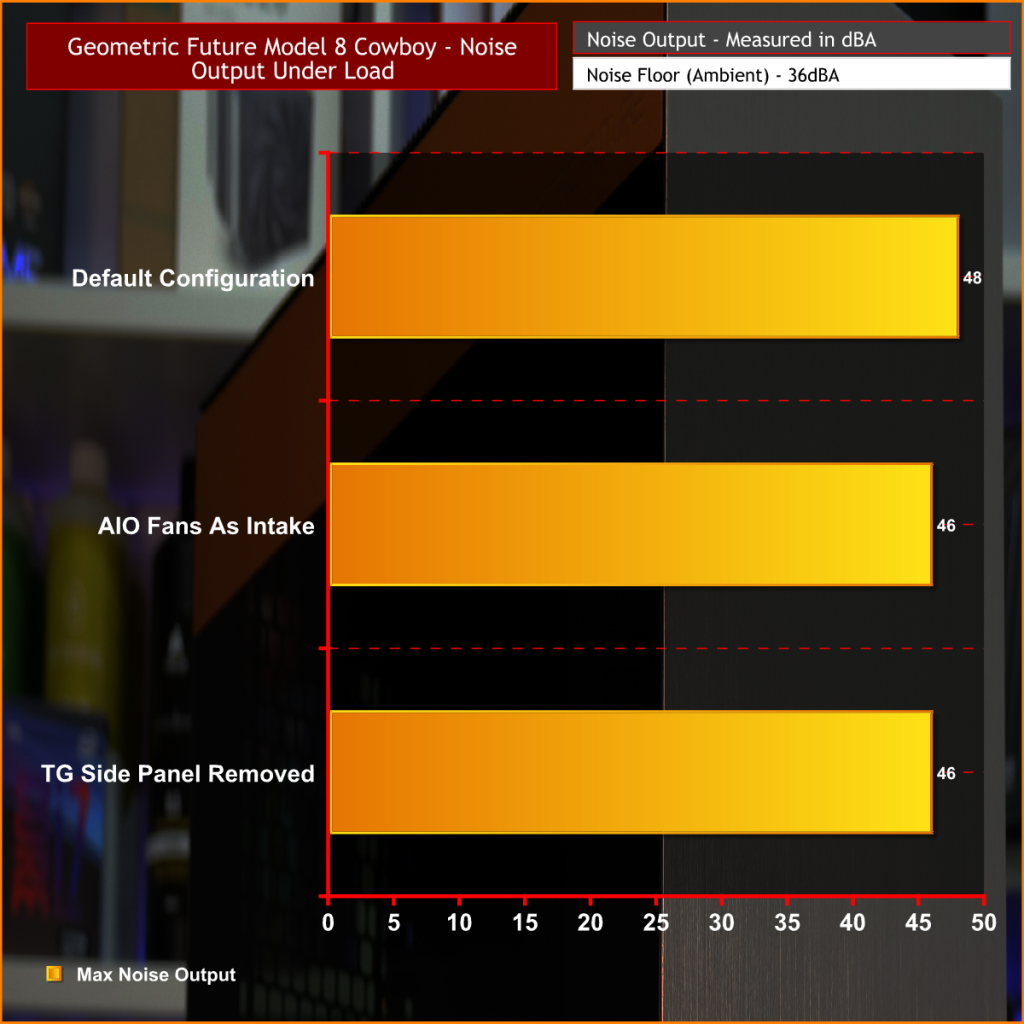 In either configuration, noise levels were respectable at under 50dBA during a full system load. However, as we usually see, removing the tempered glass panel improves cooling and therefore slightly lowers noise output as the graphics card fans don't have to ramp up the RPM as much to keep GPU temperature under control.

Geometric Future’s Model 8 series is a very solid attempt by a company that is new to the enthusiast market. It brings a fresh new look and interesting take on the mid-tower ATX format. Even though we have seen other cases in the past that use this 90° rotated motherboard layout, I think Geometric Future has grabbed the idea and brought it up to date with a clean, understated modern exterior paired with good build quality and support for all the usual hardware specifications we expect to see in a mid-tower in 2022.

The use of leather is an interesting choice and not something I can recall seeing before coming as a stock feature. From new, the leather is quite bright in colour, almost orange looking but according to Geometric Future, as time goes by and the leather ages, it darkens in colour turning brown. Does this mean that we finally have a case made to compliment the colour of traditional Noctua fans? I hope so.

I have one or two minor gripes with the case but these could be resolved quite easily. One is the lack of cable cut out grommets on the openings directly below the motherboard tray. There are two sets of large cutouts there without grommets, lot of cables pass through here so it can start to look quite untidy especially since the case has two glass outer panels that you can see right through.

The other minor issue is the rear air intake/vent and lack of a supplied dust filter. As we found during our thermal testing, with a thick graphics card such as the RTX 3080 Aorus Master, running the AIO at the rear with the fans pulling air in from the rear and across to the graphics card fans was optimal for both CPU and GPU temperature. The lack of a filter here means that the radiator could clog up quickly with dust, so regular system maintenance will be critical. 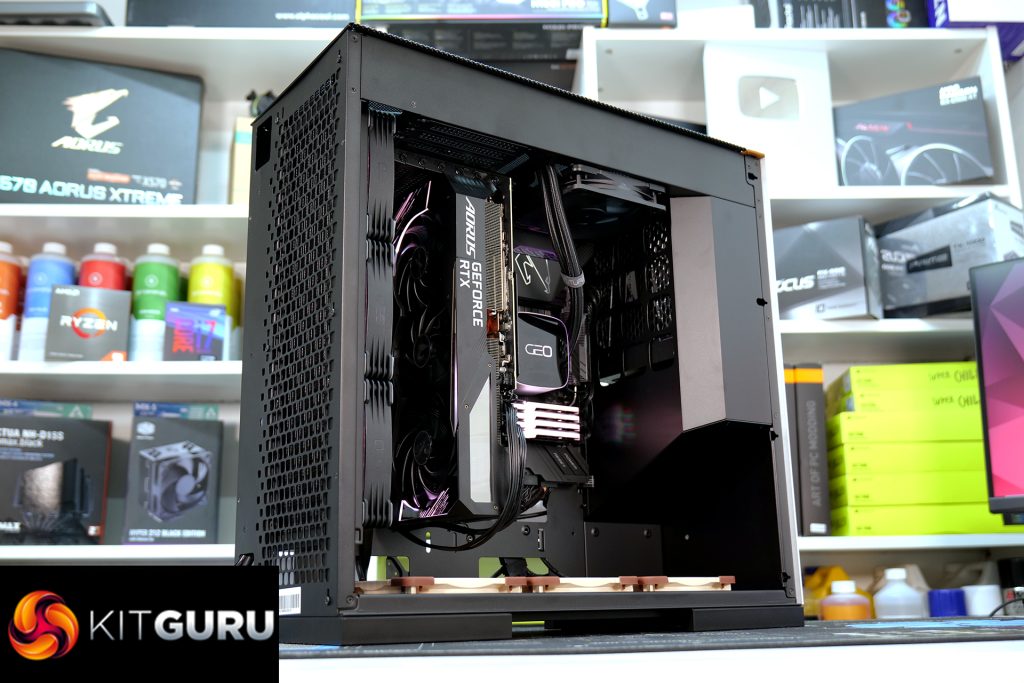 Other than these minor problems, once you get your head around the fact that everything is rotated by 90° and cables/connections are in different places compared with a traditional layout, building a system inside this case is no more difficult than it is in any other ATX case and, in our opinion, the finished product looks great, it's different than usual which we think is good, but it may not be to everyone’s taste.

In terms of build quality, we have no major concerns with the materials used, the case seems to be constructed well and it feels very sturdy to build a system in. Alignment of PCIe slots, motherboard standoffs etc are fine, nothing needed to be forced into position during installation. The tempered glass panels are quite heavily tinted but being the same on both sides of the case gives it a clean and symmetrical look from both angles.

The Geometric Future Model 8 Series is available to purchase from Amazon UK, prices start from £154.90 HERE.

KitGuru says: The Geometric Future model 8 series is a solid early attempt by a new company to the enthusiast scene. With its rotated layout, exotic materials and sleek looks we like it a lot, what do you guys think? 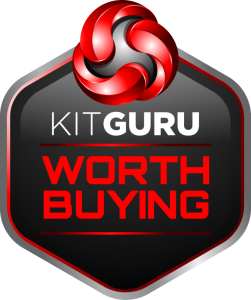