The entry-level Commander G series Tempered Glass ARGB chassis is a brand-new design from Thermaltake, with high flow mesh front panels to enhance cooling performance. All three chassis in the Commander G range include a pre-installed 200mm ARGB front fan that can be controlled by motherboard sync software or the integrated RGB button located on the front panel.

A premium quality 4mm thick tempered glass side panel offers a more robust, scratch-resistant alternative to acrylic and provides a great view of internal components. The Commander G series chassis also includes the opportunity for vertical GPU mounting via an optional PCIe riser cable. In addition, the included GPU support bracket not only prevents GPU sag but helps reduce stress on the motherboard caused by the weight of heavy GPUs. 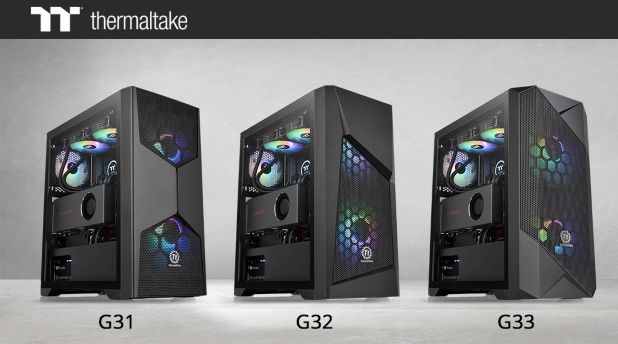 Thermaltake has included a generous amount of expansion options in the Commander G series. CPU air coolers up to 165mm tall are catered for, along with installation space for 2-way GPUs up to 300mm long, when mounted horizontally and 45mm width for vertical mounting support. Power supplies up to 200m long can be installed with the HDD cage removed.

In terms of cooling, there is space for two 200mm fans in the front, two 140mm fans at the top and a single 140mm fan in the rear. The front I/O consists of a single USB 3.0 port, two USB 2.0 ports and an easy to access RGB control button on the top-front panel.