Mid-tower cases are probably the most popular among gamers and enthusiast PC system builders as they offer enough space for components, while not looking too overpowering on a desk or even in the living room entertainment system.

Thermaltake already has an impressive range of mid-tower chassis to choose from and has now announced it is adding to the H series line with the H550 TG ARGB mid-tower. The Thermaltake H series cases feature an RGB lighting strip integrated into the front, The H550 TG ARGB continues this theme with an aluminium front panel having diamond-cut angles and addressable RGB lighting that can be synchronised with motherboard software, including Asus Aura Sync, Gigabyte RGB Fusion, MSI Mystic Light Sync and ASRock Polychrome via 5V 3-pin headers.

Along with RGB lighting in the front panel Thermaltake has included a 120mm ARGB fan. For users that don’t have ARGB compatible motherboards, an RGB button has been integrated into the front I/O to scroll through RGB lighting colours and patterns. The H550 TG ARGB chassis also features a 4mm tempered glass side panel, a GPU riser support bracket and magnetic dust filters to keep the system looking clean. 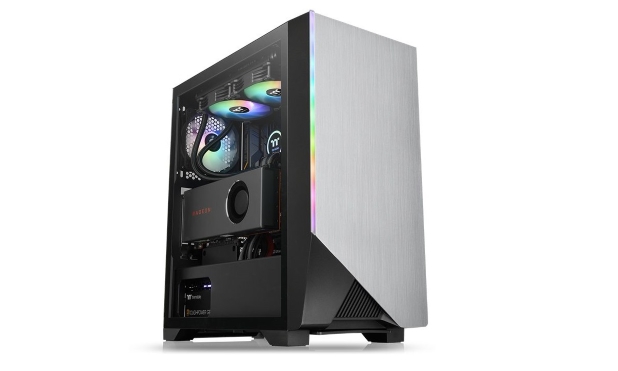 The Thermaltake H550 TG ARGB provides plenty of options for hardware and expansion, with space for CPU coolers up to 165mm tall, dual GPU installation of graphics cards up to 300m in length and power supplies up to 200mm long being compatible. Thermaltake claims the H550 TG ARGB case is optimised for cooling with a 120mm fan pre-installed in the rear, up to three 1200mm fans can be installed in the front and two 140mm fans in the top.

KitGuru says: The Thermaltake H550 TG ARGB case has a minimalist look while the sharp angles and RGB give it a bit of style. Is this type of case something you guys would be interested in?