When we recently reviewed the Corsair 5000D AirFlow case we used a cooling configuration with nine Corsair LL120 fans, mainly for the banging RGB. Temperatures were fine, the finished PC looked good and we were happy… but a number of viewers posted comments below the video pointing out the three side fans were in exhaust where they reckoned side intakes would do a better job.

We are currently working on a review of the Corsair MP600 Pro Hydro X liquid cooled SSD so this was the ideal opportunity to revisit the 5000D AirFlow and check out the fan configuration. As you will see in our video we first installed the temperature sender in the Corsair Hydro X XD5 pump/reservoir which allowed us to use the Hydro X profile in Corsair's iCUE management software. This worked in a far more satisfactory manner than the Quiet or Extreme fan profiles as the fan speed would ramp up based on coolant temperature.

The problem, as you will have seen, was that iCUE was unhappy handling the two Corsair Commander Pro units were were using with the nine fans as the temp sender was only reporting to one of the two Commanders. By any definition this is a niche use case and while it was frustrating we struggle to claim it is a major problem. We followed Corsair's advice and hooked six of the fans into the fan repeater hub that comes with the 5000D AirFlow and then connected the hub to one Commander Pro and removed the other.

As we showed in the video, the nine fans would work perfectly happily and then suddenly iCUE would become flaky and some of the fans would simply vanish from the control system. In other words, while we liked the Hydro X fan profile we were unable to get it to work consistently. We ended up removing three of the fans and connecting the six remaining fans to one Commander Pro and at that stage everything was fine. 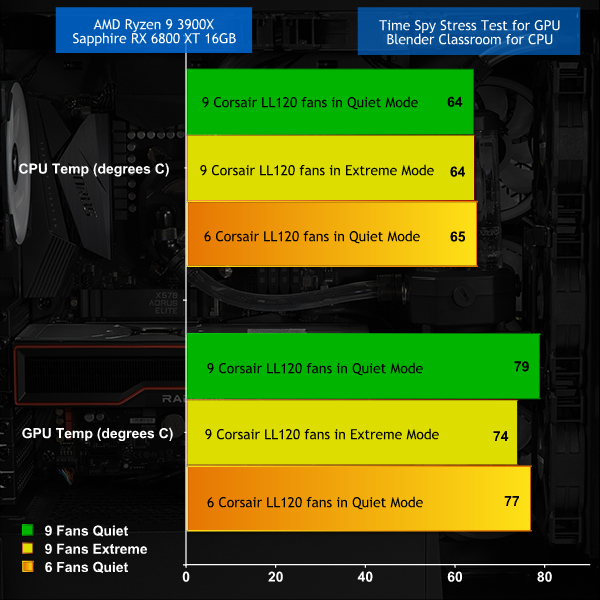 This is the original chart from our 5000D AirFlow review. 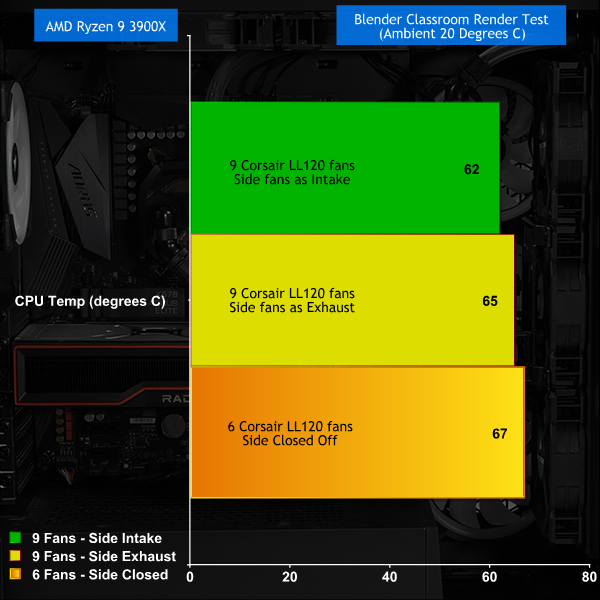 This chart shows the three fan configurations, all running in Quiet mode and it is clear there is a benefit using the side radiator position for intake rather than exhaust.

We have demonstrated the KitGuru audience was quite correct to ask for the front and side fans to be used in intake with the top and rear fans in exhaust, however the benefit is fairly slight at three degrees C. While we welcome lower CPU temperatures, for all the reasons stated above and in the video we have actually chosen to run this system with six fans and the side position blanked off. This doesn't hurt temperatures to any great extent and it helps cable management and PWM control. Just as importantly we consider that six fans is a reasonable number for an enthusiast while nine fans are more of an extreme use case.

During our review of the Corsair 5000D AirFlow we were confident the case lived up to its AirFlow name and provided decent cooling. Nonetheless it was surprising for us to see that making big changes to the fan configuration resulted in relatively small changes in temperatures. Our chosen AMD Ryzen 9 5900X is a serious CPU and will show up the weakness in any cooling system so we are working in a narrow range between ‘good' and ‘very good'. This meant we were able to change to a cooling set-up that was considerably more straightforward and which avoided problems with Corsair's iCUE software. 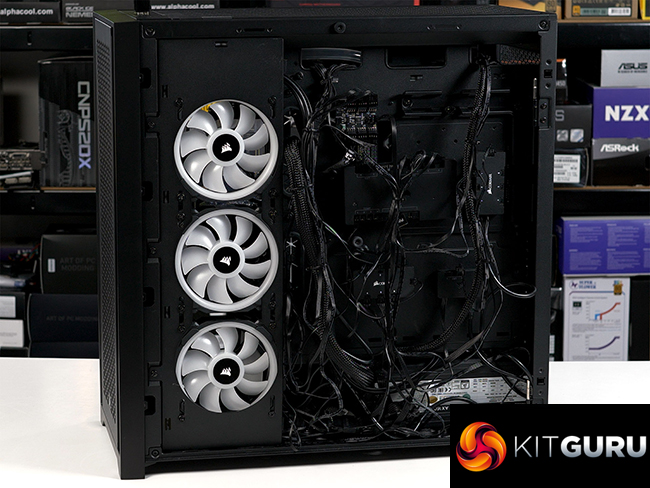 There are some interesting comments below this video from the KitGuru audience that discuss conflicts between HWiNFO and iCUE and while these might be correct we are not certain they go to the heart of the issues we suffered. Clearly there is no requirement to use a utility such as HWiNFO, however we consider it to be one of the best pieces of software in our toolkit. By contrast Corsair iCUE is an absolute necessity for anyone who has Corsair RGB products to control. We do not consider it is unreasonable to want them to work happily together.

KitGuru says: Testing different hardware combos can lead to frustrating times however the results are both interesting and informative.