Today we are going to test the BitFenix Prodigy with our MSI E350IS-E45 which uses the AMD E-350 (Zacate) APU.  While this isn’t the fastest and greatest Mini-ITX configuration, it is a more likely set-up for those of you who are going to be using this case as a HTPC or Media Server.

We will be using the BitFenix Prodigy in its default set-up with just 2x 120mm fans, and then we upgraded to 2x 140mm Phanteks fans. We know these will provide a greater airflow while emitting less noise. Unfortunately this motherboard only has CPU Core temps and the HDD temps available to us.

Room ambient temperatures were maintained at a steady 18c throughout testing and the coolers were all set to their maximum fan speed.

The airflow system of this case is much like any larger chassis with intakes at the front, and exhaust at the top and rear.

This shows that even with the CPU temperature increasing quite significantly, the HDD temperature was hardly affected. The case does manage to get the hot air out of the case, even with such diminutive dimensions.

By adding the 140mm fans it didn’t really effect the processor temperatures much at all, due to the heatsink design of the motherboard – it sits below the height of the memory so airflow from the case fans doesn’t pass over the CPU heatsink.

That said, it is clear that the hard drive temps were significantly better so you can still see the cooling potential of this case. With a large 230mm fitted at the front of the case the temperatures would be very low for a tiny noise output. 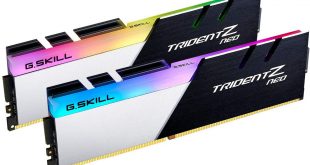 For Day 5 of the KitGuru Advent Calendar 2020, we’re teaming up with the folks at G.Skill to give you the chance to win an excellent memory upgrade. Our prize today is a 3600MHz, 64GB kit of Trident Z Neo memory.