Taking one side of the case off, we can see the inside maintains the matt black theme and is fairly spacious.

The hard drive mounting system is a series of trays which can be easily removed just by squeezing the ends into the middle and pulling the tray out.

The trays themselves are a very simple design with four pins that push into the side of the 3.5″ drives, locking in place. If you are using a 2.5″ SSD for instance, you will have to screw the SSD down in the holes provided.

While there are only 5 x 3.5″ bays, there are 6 x 5.25″ bays, which is plenty. Cougar have adopted a system very similar to other cases on the market which involves a screwless locking mechanism and only requires one side to be locked in place.

Moving to the back of the case, we can see that there is a large CPU cut-out which allows plenty of working space when installing a new motherboard backplate for a new CPU cooler.

There is also a bright 120mm orange fan included, but two more 120mm fans could be fitted into the top of the case.

While Cougar haven’t included any locking mechanisms for the 5.25″ bays on this side of the case (as you shouldn’t need them) you could still revert to the old fashioned method of screwing the drives in. The locking mechanism is designed to hold the drive tightly enough that it shouldn’t be necessary to secure the drives from the other side.

Taking the front of the case off was a bit fiddly as it was quite stiff, but after some gentle levering, we were left with a very bare bone chassis. Two 120mm fans can be fitted to the front of this case, although the top one does of course block several of the 5.25″ bays.

The top fan is included from Cougar, and has a decent dust filter fitted. It is possible to also move this higher up the front of the case.

The bottom fan mount looks a bit out of place and doesn’t even have a proper dust filter – although the front of the case does. Unfortunately due to the mounting design it is not possible to fit a 140mm fan which is a bit of a shame considering there is plenty of physical space. 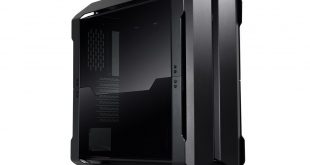 The Lian Li Odyssey X is officially coming to the UK. This large form factor …