The Cougar Evolution case is packaged in a thick black cardboard box with a very large product image on the front. The theme is simple but very clear.

The back of the box shows some of the key features of the Evolution model, using several diagrams.

The case is protected between two large Styrofoam blocks on either side and a fabric protective wrap to keep the case from getting scratched or damaged.

Removing all of the packaging and looking at the left-hand side of the case, we can see it has a fairly sleek look with the addition of the bright blue model name, ‘Evolution’ written across the lower side of the case. The window has a slightly chunky design, but does have space for a huge 140mm intake fan.

As I said earlier the front of the case reminds me a bit of the CM 690 II, mainly due to the mesh design, however Cougar have used a large plastic grill on top of the mesh.

The top of the case has a few more special features when compared to similar cases. Cougar have incorporated a 2.5″/3.5″ SATA dock on top of the case and a dual-fan controller. There is also plenty of space to fit 2 x 120mm fans across the top.

The top of the Cougar Evolution case with a dual-fan controller, this incorporates the start button. There is also 2 x USB 3.0 and 2 x USB 2.0 ports, a headphone and microphone socket and a reset switch.

The bottom of the case  has two ridges which each have two rubber feet. The underside of the case is raised off the ground allowing a high level of airflow inside the case. Additionally, there are dust filters on the bottom, which slide off from the rear.

The back of the case is fairly standard for a bottom-mounted PSU design, as it features two push-out holes for water-cooling pipes as well as space for 8 PCI cards. The Cougar Evolution comes fitted with a 120mm exhaust fan at the back as standard.

Cougar have included a 3.5″ to 5.25″ bay adapter allowing you to use card readers or even floppy disk drives in the 5.25″ bays.

As you’d expect with any case, there is a selection of screws, however Cougar have also included two fan controller cables which each have three fan sockets, giving you a total of six fans. 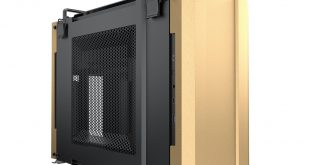 Seemingly named after the famous Counter-Strike map, the Cougar Dust 2 is a Mini-ITX case …