Corsair has updated its best-selling Hydro Series H60 all-in-one watercooler multiple times over the years, always offering better performance. Now, the company is bringing the cooler into 2018 with a redesigned look that’s guaranteed to spruce up any system while retaining the same premium components to give it an edge on performance.

The 120mm radiator’s exterior design remains relatively similar to its predecessor, while the stock fan shipped with it has been upgraded from a 7-blade to a high-pressure 9-blade SP120 that supports PWM speed control. This allows the fan to sit comfortably between 600 RPM and 1,700 RPM for a good balance between noise and heat dispersion.

Of course, the most significant change lies with the CPU block, which now sports a more dynamic octagonal look over the square box of its predecessor. Within the silver frame is a white LED, which Corsair claims to “add a touch of brilliance to your system.” 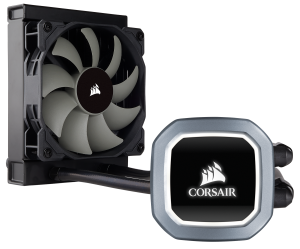 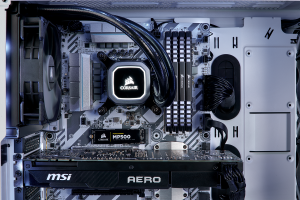 One of the most reassuring aspects of the redesign is that Corsair has incorporated the same design as its more premium Hydro Series H150i PRO and H115i PRO models, rather than cheaping out on its entry-level closed-loop watercooler.

Like previous entries in the Hydro Series, Corsair ships the 2018 redesign of the H60 with multiple brackets, so that the pump can fit across multiple different CPUs, including the latest AM4, LGA 1151 and LGA 2066. It is similarly easy to install, with rotatable fittings and rubber hoses to help fit the cooler without the need for tools.

The 2018 redesign of the Hydro Series H60 is already available, listed on the Corsair website for £76.99.

KitGuru Says: While I can’t speak for the latest addition to its line-up of coolers, Corsair does have a tendency to wow us here at KitGuru on multiple occasions. For those without the space for a 240mm radiator or wanting a lower priced entry-level model, this might be the perfect time to jump into closed-loop watercooling. Does the Hydro Series H60 tempt you?