The design of the F12 is quite unusual indeed and isn’t really like anything we’ve seen before.  The fan housing is comprised of two separate sections which are connected together with rubber grommets in the four corners to help suppress vibrations.

Arctic have chosen to hang the fan from the top rather than supporting it from the bottom like a regular fan.  It’s suspended from the centre of the top section of the fan housing which acts as a guard.  The bottom section of the housing is where the four holes are located for mounting the fan.

This unusual design does have a few slight drawbacks compared to a conventional fan.  Firstly, the unit as a whole is significantly thicker than a standard fan.  It measures 38.5 mm thick compared to the 25 mm of a standard fan.  Secondly, the mounting holes are only on one side of the cooler so it can only really be used as an exhaust fan.  The unusual casing also hinders compatibility with CPU coolers as they all use different mounting systems which often require screw holes on both sides of the fans for clips to attach to.

On the end of the fan cable there is a 4-pin PWM header which can be plugged directly into your motherboard.  As this is a PWM model, there isn’t much point of having a molex adapter as this would force the fan to run at full speed all of the time.  There is another socket coming out of this header which lets you daisy chain a number of these fans together. 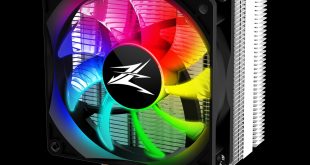 ZALMAN has updated its entry-level CPU Cooler line-up with the CNPS4X. This new single-tower air-cooler …