The line-up consists of three water blocks following a similar design principle, with subtle tweaks to size, shape and colour setting them apart from each other.

The line-up includes an Eisblock XPX Aurora Plexi, Aurora Edge Plexi and Aurora Pro Plexi. All three come in a choice of either Black or chrome detailing with a largely transparent Plexi top look to them. The Aurora Plexi and Edge Plexi are both similar in size and would be best suited to smaller desktop CPUs, such as Intel core CPUs and AMD Ryzen. However, and more interestingly, the Aurora Pro Plexi has a much larger thermal transfer plate so should be an ideal candidate to cool a larger CPU such as AMD’s Threadripper or Intel’s socket 2066 CPUs.

All three variants feature a transparent Plexi top and Nickel-plated thermal transfer plate. Lovers of RGB lighting will be happy to hear that Alphacool has equipped all the Aurora XPX blocks with a sprinkling of digital RGB lighting too.

Alphacool's patented New Flow technology is featured here, using a “ramp system” to ensure an even flow of liquid inside the block which sits in front of the diffuser plate and pushes coolant evenly over the cooler's base. The nickel-plated copper transfer plate features micro cooling fins in all three blocks, with the smaller Plexi and Plexi edge having 81 fins and the larger pro containing 147 fins in total.

An integrated ARGB solution illuminates an aluminium frame with 14 integrated RGB LEDs. Alphacool says the intensity and patterns of the illumination can be controlled by an appropriate controller on the Aurora Plexi and Plexi edge. The Aurora Pro features a 3-pin 5V connection which can be connected directly to compatible ARGB motherboards. Since this cable comes with a Y-splitter, other Alphacool products can be connected to easily sync lighting effects.

Installation of the Aurora blocks should be simple. All you need to do is remove the protective film, apply thermal compound and fix to the CPU socket base. Because Alphacool uses knurled screws, tools shouldn't be necessary for installation.

KitGuru says: So Alphacool fans, what do you think to the new Aurora XPX water blocks? With one specifically designed for larger CPU sockets such as TR4, does this mean we could see Zen 2 Threadripper appear sooner than expected? 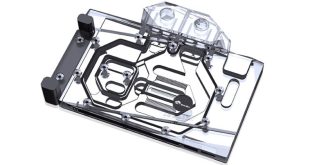 The first Intel Arc Alchemist desktop graphics card, the A380, can now be paired with …