EK Water Blocks is launching what the company calls its most extreme fan to date, the EK-Furious Meltemi is a 38mm thick high static pressure fan designed purely for raw thermal performance, with a maximum speed of 3500 RPM.

EK-Furious Meltemi fans are based around the popular EK-Vardar fan design. The Meltemi fans are developed in house at EKWB and are engineered with a thicker, 38mm frame allowing space for an uprated motor that provides improved performance over traditional 25mm thick fans that operate within the same RPM range.

EKWB claims the Meltemi fan performs best when fitted to a radiator in a pull configuration, this evens out the airflow over the surface of a radiator since the motor hub “dead zone” effect is reduced. EK-Furious Meltemi fans are equipped with a red cable sleeve to act as a warning of their high RPM rotational speed, which could cause injury to fingers when running at the maximum 3500 RPM. 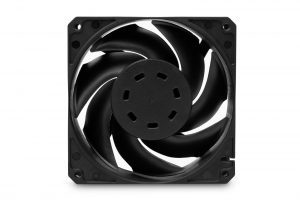 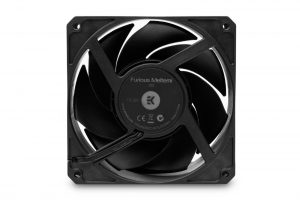 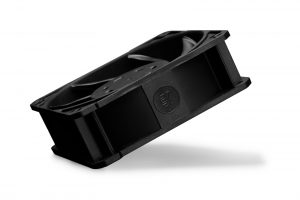 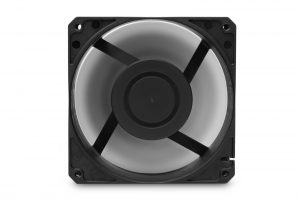 A high-quality motor and bearing assembly inside the Meltemi fans feature a dual ball bearing arrangement with a 50,000 hour MTBF lifespan at 40°C operating temperature. A PWM speed adjustment method allows for precise performance adjustment on-demand and when running at the maximum 3500 RPM speed, the Meltemi fan will produce 121CFM airflow with 7.13mm H2O pressure.

EK-Furious Meltemi fan is designed with the classic square-shaped casing to provide optimal performance in either pull or push airflow configuration, as well as offering easy cable routing when multiple fans are grouped together. An industrial plain black appearance ensures the Meltemi fans integrate perfectly with any type of system theme.

EKWB has made the Meltemi fan available in a 120mm option with a speed range of 1200-3500 RPM and a typical power draw of 9.3W. The new fans are available to purchase via the EK Webshop and from official EK retailers priced at €25.90.

KitGuru says: While these fans may not be for everyone with their high speed and potentially high noise levels, if you are looking for high airflow and raw performance, this may be the fan for you.