Love them or hate them, Noctua’s tan and brown fans have become a cult feature for enthusiast’s PC system builders due to the excellent cooling performance and low noise levels they provide. Ever since Noctua announced plans to introduce black chromax versions it has divided opinions.

Apart from the change in colour, the design, performance and noise output of Noctua NF-A20 PWM, NF-A12x15 PWM, NF-A9 PWM, NF-A9x14 HS-PWM and NF-A8 PWM fans remains the same. The new colour scheme consists of an all-black fan with red, white, blue, green, yellow and black anti-vibration pads bundled in for users to choose which colour best suits their rig.

“First introduced in 2015, our chromax line is aimed at customers who value individual, focused build aesthetics just as much as class-leading quality and performance,” says Roland Mossig (Noctua CEO). “With the new chromax.black.swap models, we’re broadening the scope to include fan sizes other than the regular 120 and 140mm formats, some of which should be particularly attractive for ITX and Small Form Factor builds.”

The majority of the new Noctua chromax fans are aimed towards compact, space-restricted system, however, the 200mm NF-A20 is ideal for cooling large towers with plenty of space. The Noctua NF-A9 and NF-A8 chromax are available in 92mm x 25mm and 80mm x 25mm versions, so are ideal for case fans while the NF-A9 could be an excellent match for compact tower coolers such as the NH-U9S or the NH-D9L. In addition, the slim 120mm NF-A12x15 and 90mm NF-A9x14 are perfect for low profile downdraught type CPU coolers. 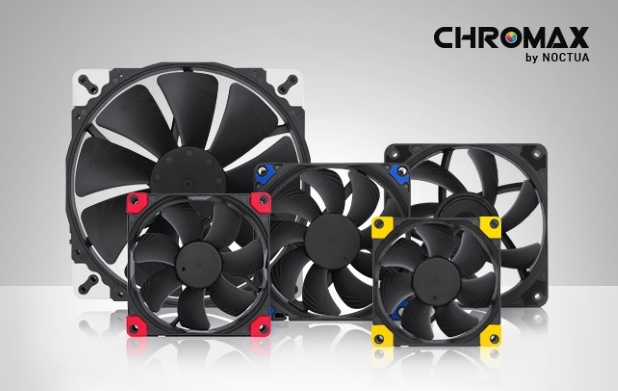 Chromax black swap versions of NF-A20, NF-A9 and NF-A8 feature interchangeable anti-vibration pads for colour-customisation. Provided in the kits are 4 white, red, blue, green and yellow as well as 8 black pads. Additional sets of the anti-vibration pads can be purchased separately in a single colour, so users can outfit both sides of the fan in one colour. The NF-A12x15 and NF-A9x14 slim models feature self-adhesive pads, with 8 of each colour included so that both sides of the fan can be outfitted with any colour out of the box.

For further customisation, a wide range of accessories such as coloured cables and anti-vibration mounts are available separately. Noctua chromax fans are manufactured using Noctua's premium grade SSO2 bearing with more than 150,000 hours MTTF and backed up by a six-year warranty.

KitGuru says: Personally I love the fact that Noctua provided consumers with the option to purchase its fans in all-black versions, now with even more options to choose from, system builders can colour match Noctua case fans too.