Since AMD launched its latest Rzyen Threadripper 3000 processors last month, we have found that when pushed hard, even some of the best TR4 coolers on the market can struggle to keep CPU temperature under control, especially when using an adapted AIO that does not fully cover the Threadripper IHS.

Testing of the latest AMD Ryzen Threadripper processors has found that when the CPU is overclocked, power draw can be anything up to a massive 300W. This is something that previous generation Threadripper CPU coolers were just not designed for, so to keep the new HEDT CPU cool, you will either need to have fans spinning at maximum RPM or detune your overclock. Both these solutions are not ideal.

However, this may be about to change since a new type of CPU cooler is in the making. The ProSiphon technology concept of the IceGiant isn’t revolutionary by any means, but it is different to the technology deployed in traditional heat pipe air coolers or all-in-one liquid coolers currently available for the consumer market. 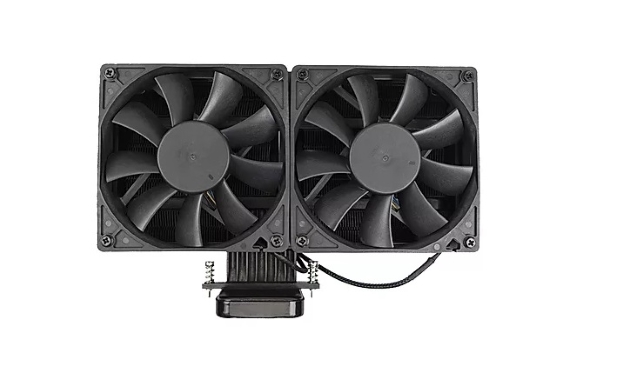 Unlike typical thermosiphon designs, the technology used in the IceGiant ProSiphon Elite means it can operate when mounted horizontally or vertically on the motherboard. IceGiant launched 30 prototype models of the new CPU cooler in 2019 with the aim to reduce manufacturing risk and prove the thermal performance goals were met. A recent YoutTube video from Linus Tech Tips seems to back up the claim that IceGiant has achieved the thermal performance target since the ProSiphon Elite came out on top in testing.

The IceGiant ProSyphone is due to be available during the spring of 2020 and the finished product is expected to be considerably reduced in size compared to the prototype models. IceGiant claims the reduction in size will not affect thermal performance at all, as the number of condenser cores will be increased and fans will be moved closer to the condenser in the final product.

This reduction in size means the IceGiant should offer even better compatibility with a broader range of desktop cases and more important, it will stop the fans being choked by a GPU installed in the top PCIe slot, something which could have been a problem with the prototype model. Additionally, the reduction in size means the weight of the cooler will be reduced too, so there will be less strain on the motherboard CPU socket.

KitGuru says: Personally, I have seen many adapted AIO’s and air coolers that don’t completely cover the Threadripper HIS struggle to keep temperature under control even with mild overclocks. Could the IceGiant ProSyphon be the future of Threadripper cooling?

Previous KitGuru Advent Calendar 2019 Day 17: Win a SSD, memory & peripheral bundle from Patriot! (closed)
Next THQ Nordic has made a playable teaser for a remake of Gothic