Be quiet! make some of the best CPU coolers around, the Dark Rock series in particular has been a consistently top performer. This year at CES, we had the chance to catch up with be quiet! and to our surprise, we were greeted with the Dark Rock Pro 4 and Dark Rock 4 CPU coolers, which make several improvements over previous models, particularly when it comes to the mounting system.

Starting off with the Pro model, as usual, this is a dual-fan air cooler. It is massive, with more than enough capacity to cool up to 250W TDP processors. On the front you'll find a 120mm PWM funnel shaped SilentWings 3 120mm fan with airflow-optimized blades, a six-pole fan motor and FDB. The inner fan carries the same feature set, but it is a larger 135mm Silent Wings 3 instead, which will help dissipate heat by blowing it out the back of your case.

Compared to the Dark Rock Pro 3, the new model gives us the ability to lower fan speed and therefor noise levels, without losing any performance. One big change is that the bottom fins now have a cut out to support taller RAM modules, which was a concern for many when buying the Dark Rock Pro 3. The cooler also has a special black coating with ceramic particles, which is said to improve heat transfer.

The Dark Rock 4 is the single fan/heatsink version. It comes with one 135mm SilentWings PWM fan, decoupled fan mounting, six copper heat pipes for swift heat transfer and the ability to cool up to 200W TDP processors. Leo was at the be quiet! booth earlier today and noticed that the mounting mechanism has now changed, which will hopefully remove much of the complicated fiddling that was previously required. 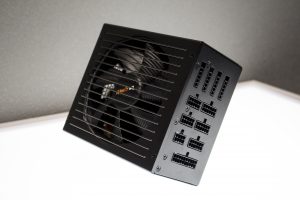 While the Dark Rock 4 coolers were the stars of the show, be quiet! also had a new power supply to show off. Above you will find images for the Straight Power 11, which has a wire-free design on the DC side. Removing the wires results in better cooling because there is nothing obstructing airflow. The connections between individual components are also shorter, which means fewer signal disturbances. The lack of induction from cables should also boost signal quality.

The Straight Power 11 PSU launches on the 16th of January. Meanwhile, the Dark Rock 4 and Dark Rock Pro 4 CPU coolers are slated for a Q2 2018 launch.

KitGuru Says: I have extensively used the Dark Rock 2 and Dark Rock Pro 3 in my own personal builds over the years. Mounting these coolers was a bit complicated, so I'm looking forward to seeing the changes that have been made for these newer models. Are any of you currently looking to upgrade your CPU cooler? What do you think of this new pair from be quiet?