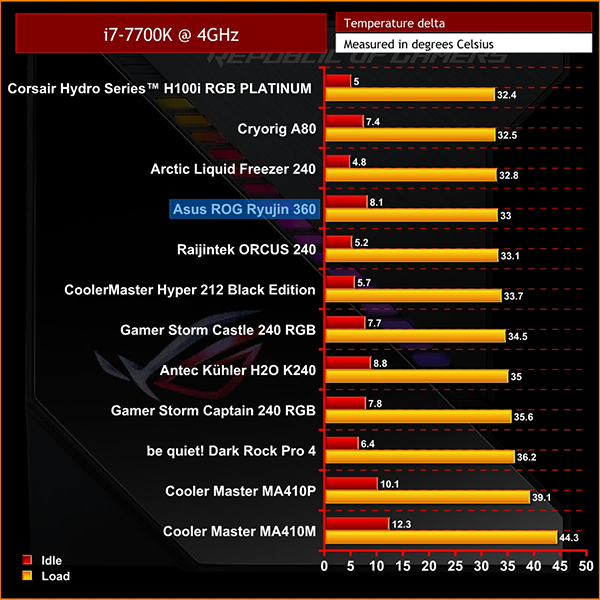 With our i7 7700k locked in at 4GHz, the Ryujin 360 performed pretty admirably, coming in 4th from the top – but with a very minimal difference between 4th and 1st place, this is still really impressive. At 8.1 degrees at idle it is a little warmer than some competitors, but again only a minor difference of 3 or so degrees compared to our best in test, the Corsair Hydro Series H100i RGB Platinum. 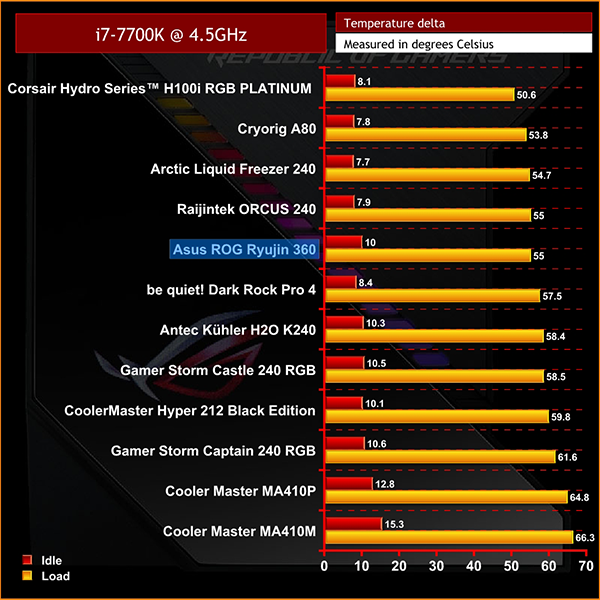 At 4.5 GHz the Ryujin 360 still retains that 4th place position alongside the Raijintek Orcus 240, with a temperature delta of 55 degrees. Overall temperatures are really solid but our noise testing does provide a bit more detail as to what’s actually going on. 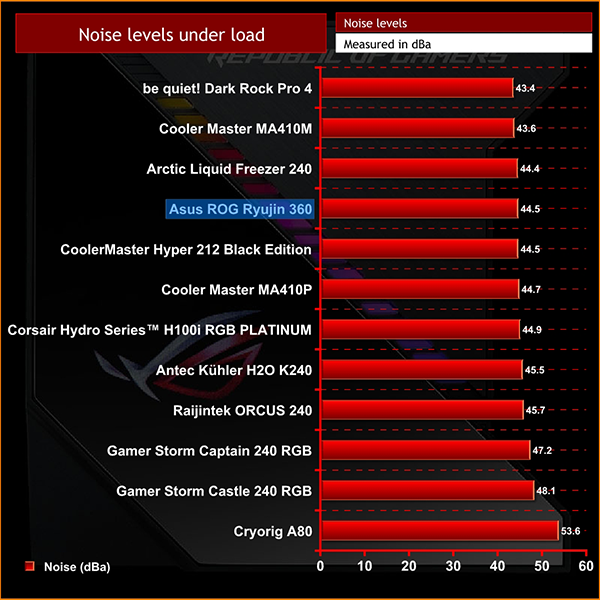 The Ryujin 360 came in at 44.5 dBA with our i7 7700K overclocked and under full load, which is only surpassed by the Arctic Liquid Freezer 240, and larger air coolers. This is actually really impressive considering the higher number of fans, not only the three mounted to the radiator, but also the smaller 60mm CPU block fan. Basically, the Ryujin 360 is still providing great cooling performance, without the cost of high noise levels.

There is, of course, a lot of scope to adjust fan speeds and set up profiles as the Ryujin 360 is supported through software, specifically through ASUS AI Suite. This also allows you to overclock and provides a bunch of detail on system performance, but in the interest of testing noise levels and VRM temps, I focused on just the 60mm CPU block fan.

During our standard testing, noise levels were impressive at 44.5 dBa, and the 60mm fan was barely audible. Checking VRM temps during testing with our 4.5GHz overclock, they sat at 53 degrees, which is fine, but ramping up the 60mm fan to full speed did see a significant decrease in temps – down to 36 degrees on the VRM. ASUS does claim that this fan helps to cool the VRM and M.2 area by up to 20°C, which was basically the case in my testing.

However, with the 60mm fan set to its fastest speed,  it was significantly louder and way more noticeable. In actual fact, with the 60mm fan set to full speed, we recorded a new peak noise level of 52.7 dBa – making the Ryujin 360 way louder than any other cooler tested so far, with the exception of the Cryorig A80, which also features a 70mm fan mounted to the CPU block. 52.7 dBa was only clocked with the 60mm fan running at maxed out full speed, so in normal operation its unlikely to reach this noise level, but it’s worth noting if you are looking to make use of the full potential of this VRM cooling, you can expect higher noise levels.