ARM Holdings, a leading developer of microprocessor technologies for mobile and low-power devices, on Tuesday introduced its new general-purpose core designed for entry-level and mainstream devices based on Google Android operating system in 2015 and beyond. In addition, ARM revealed its new cost-optimized Mali-T720 graphics processing unit.

ARM Cortex-A17 processor is claimed to offer 60% higher performance compared to Cortex-A9 processor and generally resembles the Cortex-A15. The Cortex-A17 is an out-of-order ARMv7-A architecture processor that supports SMP technology for one to four cores, 256KB – 8MB L2 cache, 128-bit AMBA 4 ACE coherent bus interface and so on. Unlike the Cortex-A15, the A17 does not support virtual 40-bit addressing and thus cannot address more than 4GBs of random access memory, which makes it useless for micro-servers. The A17 can work in heterogeneous multi-core Big.Little configurations with the Cortex-A7 cores. 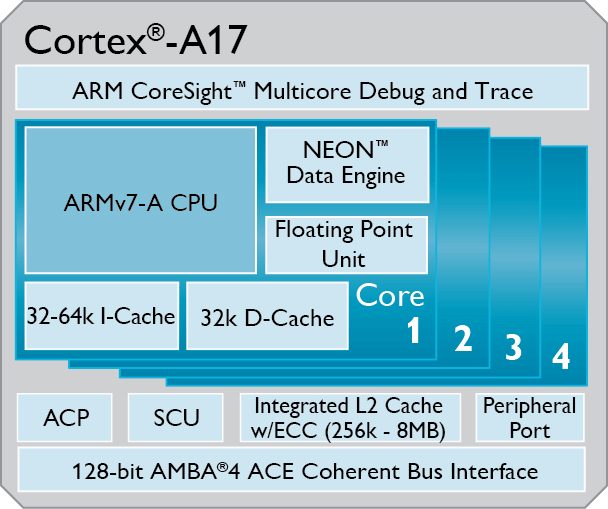 At least three system-on-chip developers, including MediaTek, Realtek and Via Telecom, plan to use the new Cortex-A17 insides their upcoming application processors.

The Cortex-A15 has not become a truly-popular solution on the mainstream market since it was designed with servers in mind and probably licensing terms were inappropriate for mainstream devices. It looks like the Cortex-A17 has chances to become a new “working horse”, akin to Cortex-A9, which powered hundreds of millions of smartphones from 2010 to 2014. The ARM Cortex-A17 will power the next wave of mainstream solutions.

Unfortunately, it will further widen the gap between different Android-based devices since there will be high-end solutions based on 64-bit ARM Cortex-A57 cores, performance mainstream devices powered by 64-bit ARM Cortex-A53, mainstream products featuring 32-bit Cortex-A15 or Cortex-A17 as well as plethora of low-end gadgets with Cortex-A7 or even A5 general-purpose processors.

KitGuru Says: With the addition of ARMv7 processor, it looks like 32-bit computing will live for quite a while on the market of mobile gadgets…