Intel Corp.’s “Skylake-S” central processing units for desktops are still months away from their launch, but the company’s partners in China are already testing the final chips in their labs. A web-site has published a CPU-Z screenshot, which proves specifications of Intel’s flagship “Skylake-S” model, the Core i7-6700K.

Intel is expected to start volume shipments of its dual-core Core M and Core i-series “Skylake” microprocessors for high-performance tablets, 2-in-1 hybrid PCs and notebooks in August, according to Asustek Computer. Desktop-class processors with four cores, advanced graphics engines and large caches will be shipped after mobile chips and are currently expected to hit the market in late-September or early-October.

Chinese partners of Intel are already testing engineering samples of the company’s Core i7-6700K microprocessor, which means that the chipmaker has already started to ship high-frequency “Skylake-S” central processing units to allies. Early samples of “Skylake” CPUs operated at 2GHz – 2.3GHz clock-rates, which rose questions about the ability of such microprocessors to work at high frequencies. The screenshot, allegedly published by HKEPC web-site, proves that the flagship “Skylake-S” will feature 4.0GHz default clock-rate. At the moment the picture was taken, the chip overclocked itself to 4137.68MHz. 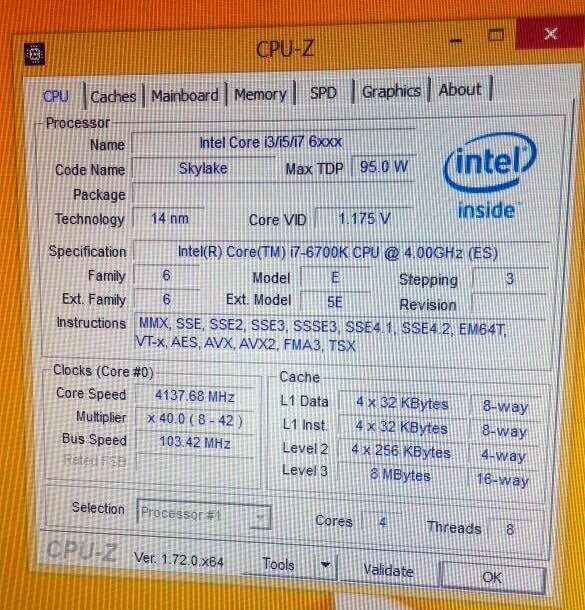 All initial Intel Core i5 and Core i7 “Skylake-S” processors for desktops integrate four x86 cores with or without Hyper-Threading technology, a new integrated graphics processor with improved multimedia capabilities, a dual-channel DDR4/DDR3L memory controller and 6MB or 8MB of last level cache (LLC). The chips will come in LGA1151 form-factor and will be compatible with motherboards powered by the Intel 100-series chipsets, including Z170, Z150, Q170, Q150, B150 and H110.

KitGuru Says: It looks like Intel’s “Skylake-S” is a solid chip that can offer decent performance and which is ready for mass production now. We have no idea about current yields and volumes that Intel intends to ship initially, but it looks like this year’s enthusiast-class CPU will finally debut this Fall.