The most affordable microprocessors based on the “Skylake” micro-architecture have finally managed to reach the market. The new Intel Pentium G4500T is now sold in select stores in Tokyo, Japan, and is expected to become available in other parts of the world, making low-cost PCs featuring the latest micro-architecture from Intel Corp. a reality.

The Intel Pentium G4500T is a dual-core processor without Hyper-Threading technology that runs at 3.00GHz, integrates 3MB last level cache, a dual-channel DDR3L/DDR4 memory controller as well as Intel HD Graphics 530 graphics adapter. The CPU is made using 14nm process technology, it has 35W thermal design power and comes in LGA1151 packaging. The chip officially costs $75 in 1000-unit quantities 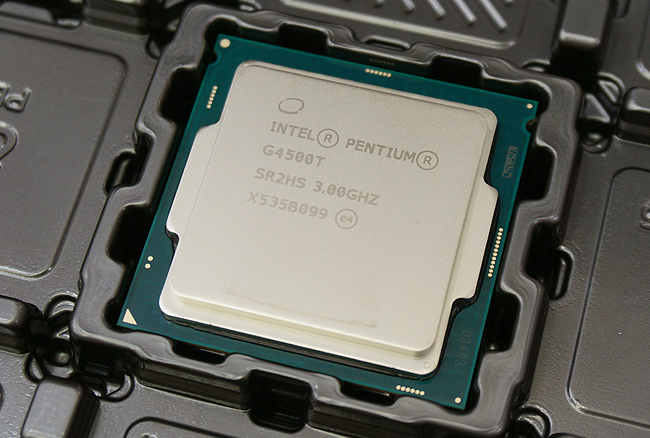 The new Intel Pentium processors based on the “Skylake” microarchitecture come with locked multiplier, which means that they cannot be easily overclocked unlike the “anniversary edition” Pentium chips featuring “Haswell” architecture. On the other hand, performance of a dual-core “Skylake” processor at 3.0GHz should be enough for mainstream tasks.

KitGuru Says: If you intend to build an LGA1151 system, but have budget constraints, it may make sense to pick a high-quality mainboard and an Intel Pentium G4500T chip. Eventually, it will be possible to upgrade it and enjoy the benefits of advanced Intel Z170 platform.