Intel to release ‘Broadwell’ CPUs with unlocked multiplier in mid-May

Intel Corp. plans to release its long-awaited Core i5 and Core i7 “Broadwell” microprocessors with unlocked multiplier for desktops in the middle of May, according to a slide from the company’s presentation. While the chips will “officially” support overclocking, they may not necessarily get popular among enthusiasts.

Intel intends to release its new Core i7 and Core i5 processors in LGA1150 packaging with unlocked multiplier, 65W thermal design power and Iris Pro graphics in mid-May, according to a picture of a slide from Intel's new presentation, which was published by an editor of Hong-Kong-based HKEPC web-site late last week. Intel traditionally refreshes its product lines in April – June timeframe, hence, it is possible that it will release its new chips in mid-May. 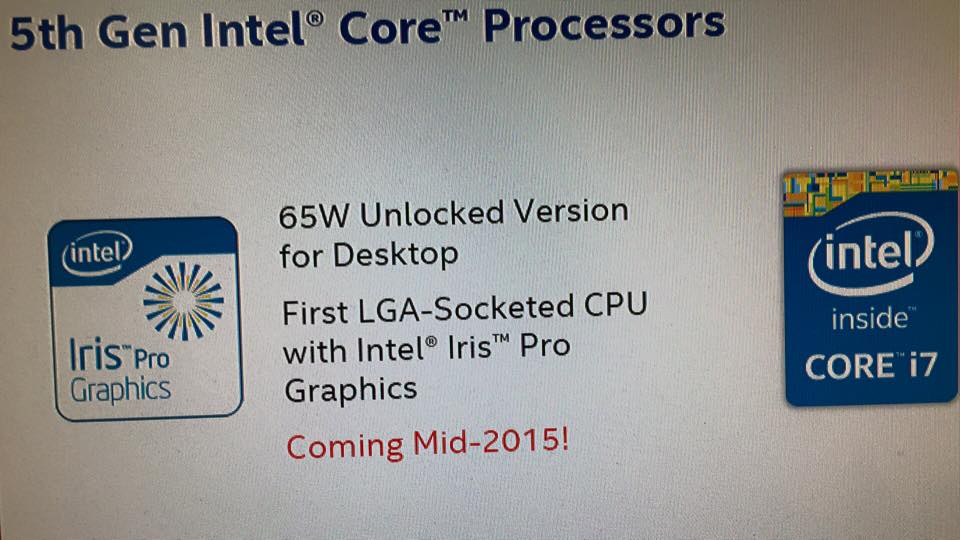 As reported earlier this year, Intel’s family of “Broadwell” processors for desktops will not be big. It will consist of five models in BGA1364 and LGA1150 form-factors designed for all-in-one and desktop PCs.

Even though the upcoming fifth-generation Core i-series processors will feature unlocked multiplier, their default clock-rates will be so low that they will not be competitive against last year’s Core i5 and Core i7 processors code-named “Devil’s Canyon” or even the two years old Core i7-4770K “Haswell”.

Prices of Intel’s Core i7-5775C and Core i5-5675C are unknown, but given their limited performance, they should not be too high.

Later this year Intel plans to release its all-new “Skylake-K” processors for desktops, which are currently expected to be the true successors of “Haswell-K” and “Devil’s Canyon”.

KitGuru Says: It looks like Intel wants enthusiasts to get its brand-new “Skylake” processors and platforms, which is why it intentionally lowers performance of “Broadwell Unlocked” chips. Hopefully, the new chips will be more or less affordable and will become a good choice for enthusiasts with budget constraints.