In an attempt to gain back market share taken by AMD’s EPYC line, Intel has unveiled its latest Xeon series of server-based chips. Codenamed Cascade Lake-AP, standing for Advanced Performance, the new line sports a whopping 48 cores and is due for release next year.

Intel has made a number of improvements over its 28-core/56-thread Xeon predecessor. The new Cascade Lake-AP chips have moved from a monolithic die to a multi-die process similar to AMD’s EPYC line, hoping to quell the numerous issues found within larger single die. This hasn’t sacrificed core count, although Intel has yet to reveal the thread count or the appearance of proprietary Hyper-Threading.

Individual Cascade Lake-AP processors can support up to 12 separate DDR4 channels, with a total of two CPUs supported on dual-socket motherboards. This doubles the count, allowing a single system to pack an unprecedented 96 cores and 24 DDR4 channels, reaching as high as 12TB RAM. 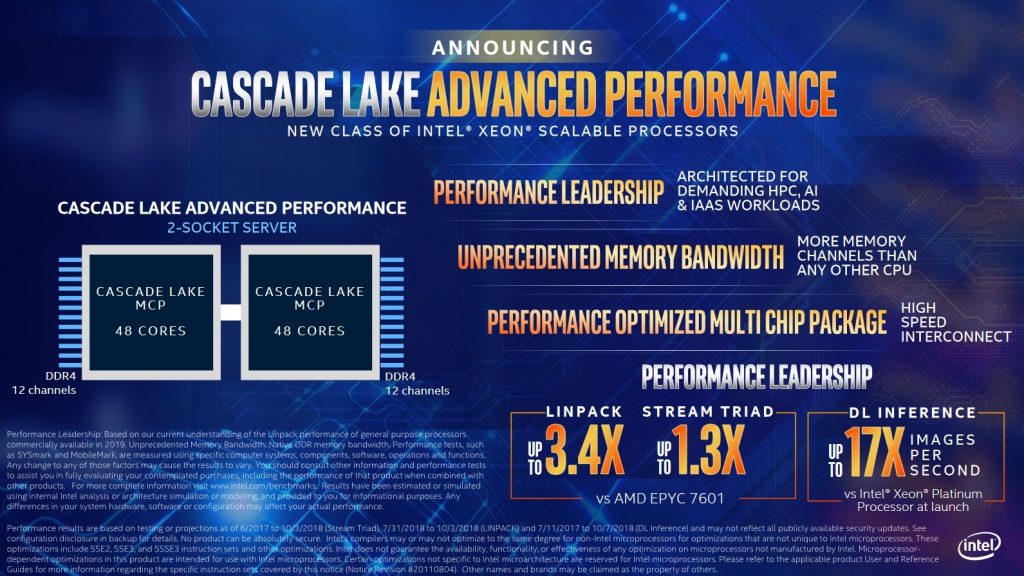 Intel stacks its new Cascade Lake-AP processors up against its Xeon Scalable 8180 processor, showing a 1.21x performance boost in Linpack benchmarks and 1.83x in Stream Triad. Even greater numbers are boasted when pitted against AMD EPYC 7601 chips, with Intel’s new offering supposedly pushing 3.4x and 1.3x the improvement respectively.

There are some things to question about Intel’s internal tests, though, with the first thing being why the firm would compare its unreleased series to AMD’s first-generation EPYC line when Zen 2 is right around the corner and available for validation. Secondly, tests were conducted in a dual-socket configuration with EPYC limited to its base clock of 2.2GHz compared to Cascade Lake-AP’s 2.5GHz. Finally, AMD’s SMT was actively turned off to cap EPYC at 32 cores and 32 threads, however Intel makes no mention of its Hyper-Threading which gives reason to believe this portion might be fair.

Cascade Lake-AP retains Intel’s 14nm process, given that the firm is publicly struggling to move to 10nm. This makes AMD’s upcoming 2nd-generation 7nm EPYC processors ones to watch as they’re expected to see a limited reveal later today.

KitGuru Says: Intel has to be careful with its testing after its commissioned 9th generation comparisons by Principled Technologies was met with criticism. It’s good that the company is trying to put up a fight in the server space, but do you think it will stack up against AMD’s upcoming Zen 2?