Last year, Intel unveiled its Core+ line of processors, bundling i7+8700, i5+8400 and i5+8500 models with 16GB of Optane memory. It seems as though a lack of demand has since led to their discontinuation, as Intel has filed a ‘product change notification’ earlier this week.

Intel spent a good portion of 2018 trying to push its Optane memory, which is in part constructed from 3D XPoint memory jointly developed by Micron. The Core+ Series targeted OEMs, but similarly offered an i7+8700, i5+8400 and i5+8500 paired with a 16GB Optane memory stick at retail via storefronts like Newegg. Sadly, the product has continuously failed to find a market, resulting in the discontinuation of the Core+ range.

“Due to lack of market demand Intel is announcing the discontinuance of the Universal and China Boxed Intel Core i7+ 8700, i5+ 8400 and i5+ 8500,” reads Intel’s notice, discovered by Tom’s Hardware.  Discontinuance Program Support began on January 14th, 2019 with last orders to be taken on September 30th. Last shipments will follow on December 27th. 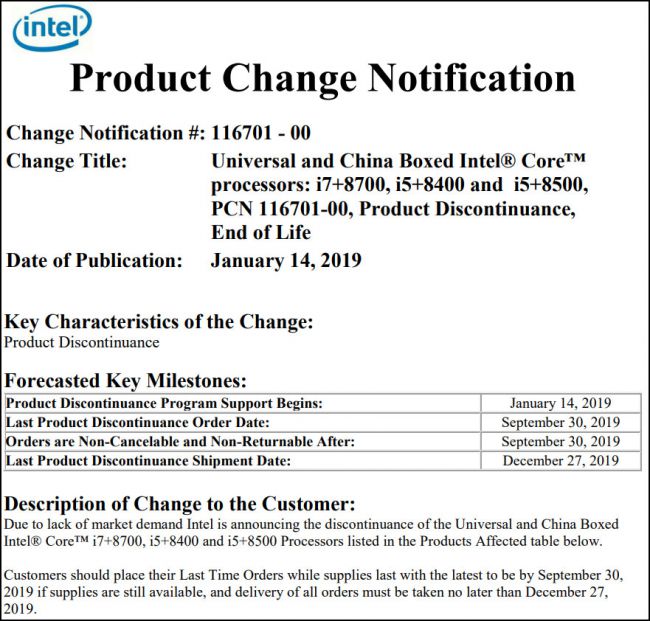 Optane memory targeted a strange portion of the market at an inopportune time. Acting as a cache memory bridge between RAM and storage, its purpose was to allow for faster communication between the two and therefore boost mechanical hard drive speeds to that of their solid state equivalents. As SSDs have fallen in price over the past year, its cost per terabyte has been diminished by competition. In the case of the Core+ bundles specifically, Intel didn’t offer any notable savings over buying the processor and Optane memory stick separately.

With joint development of 3D XPoint memory ceasing in July, last year, Micron CEO Sanjay Mehrotra has stated that the company is currently re-negotiating its terms with Intel. Although, with Micron having already suffered underutilisation charges and Intel announcing its continued solo development of the memory, it’s possible that Micron would cease selling its 3D XPoint stock to Team Blue entirely. Alternatively, Micron is hoping to purchase Intel’s share of IMFT (Intel Micron Flash Technologies), however Intel has yet to weigh in on any offers made.

KitGuru Says: Optane memory seems great for those still running mechanical hard drives, but this market is steadily evaporating. Of course, Optane can still be used with SSDs, but performance might not see any noticeable increase. Have you bought into Intel’s Optane offerings?