With the release of Intel’s 10th generation high-end desktop X-Series CPUs becoming ever closer, there is no doubt we should expect a barrage of new motherboard announcements to support the new CPU series soon. ASRock has got a head start on the rest with an update to their current X299 based motherboard lineup.

Additionally, The ASRock X299 Creator has had the WiFi 6 treatment, with Intel’s 802.11ax integrated into the motherboard. Along with Bluetooth 5.0, three PCIe 3.0 X4 M.2 slots, 40 Gb/s Thunderbolt 3 and USB 3.2 Gen 2×2 Type-C connectivity. There is also some beefy looking heatsinks including heat pipes covering the VRM, so it is likely that power delivery has been improved over ASRock’s previous X299 range, to handle Intel’s next-generation X-Series CPUs.

ASRock also announced two other additions to the X229 range. However, these are more a refresh of previous products, rather than completely new designs. Both the X229 Steel Legend and X299 Taichi CLX have been brought up to date, to support the full features of next-generation Intel X-Series CPUs. 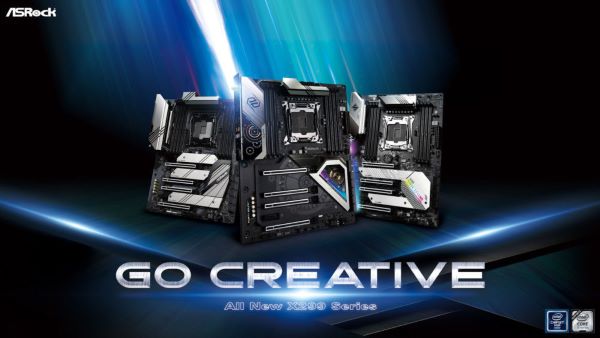 The ASRock X299 Steel Legend is technically a budget X229 motherboard aimed at mainstream HEDT users, offering the best bang for your buck.  The Steel Legend has had an update to its power delivery solution with a 50A, 11 phase power design and Dr.Mos, along with an updated heatsink including a single heat pipe. ASRock’s X299 Steel legend also features USB 3.2 Gen 2×2 Type-C connectivity for up to 20 Gbps transfer rates and Polychrome RGB LED lighting.

Finally, the ASRock X299 Taichi CLX is positioned in between the X299 Creator and Steel Legend, with features taken from both. The Taichi CLX includes WIFI 6 just like the X299 Creator, a 13 phase Dr.Mos power delivery solution, four PCIe x16 slots and a single PCIe 3.0 slot, along with support for DDR4 4200 memory and Intel Core X-Series processors.

KitGuru says: ASRock are usually great at offering feature-packed motherboards with a little lower cost than competitors. Would any of these new motherboards from ASRock be your choice to house a next-generation Intel X-Series CPU?