Intel is set to fire back at AMD in the new year when the company launches its 10th generation desktop Core series processors. Exactly when this will be is still uncertain, however, the flagship Intel Core i9-10900K is expected to boast 10 cores to offer competition to current Ryzen 3000 CPUs.

The fine details of Intel’s 10th generation Core desktop processors are yet to be officially unveiled by Intel but over the past few days, there have been leaks containing information about the new processors such as TDP and core frequency specifications.

A leaked slide on momomo_us twitter account apparently shows that enthusiast-grade K processors from the upcoming Comet Lake-S family will feature a TDP rating of 125W. this may not come as a huge surprise since Intel recently launched the 9th generation Core i9-9900KS with a 127W TDP and 5.0 GHz boost frequency. However, Intel’s current Core i9-9900K has a mere 95W TDP rating, so the bump in TDP to 125W for the Core i9-10900K is probably due to the fact it has a couple more cores than the Core i9-9900K. 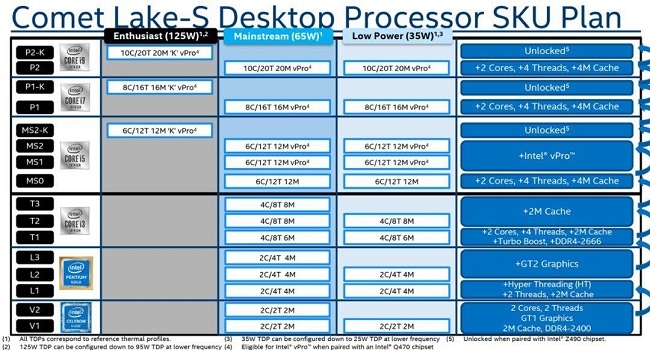 Since 10th generation Intel Core processors will be fabbed using the 14nm process, the company can only count on making marginal improvements in power efficiency which means that as the leaks slide suggest, all K series SKUs from the 10th generation Core family could carry the 125W TDP rating. The slide also suggests that mainstream non-K variants will continue with the traditional 65W TDP.

As well as leaked information regarding TDP ratings of the upcoming 10th gen Intel Core processors, the guys over at VideoCardz leaked some interesting slides from Informatica cero which show the Comet Lake-S high-end Core i9-10900K processor core frequency details. If these slides turn out to be correct then we should expect the Core i9-10900K to feature a base clock of 3.7 GHz and up to 5.2 GHz boost. An interesting new feature also claims to show that Velocity Boost will allow the CPU to boost to an even higher frequency of 5.3 GHz.

Kitguru says: With improved core frequency and more cores, Intel will be looking to hold on to its share of the desktop processor market. Do you guys think these improvements will allow Intel to keep hold of its “best CPU for gaming” tag or will the performance improvements coming from AMD Ryzen 4000 steal this label from Intel next year?