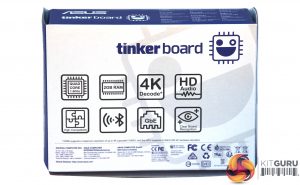 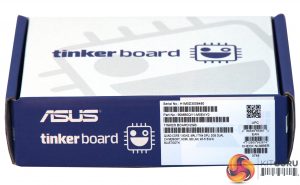 All the key features are mentioned on the box exterior. This is also a bit sturdier than Arduinos and Raspberry Pis tend to come in. 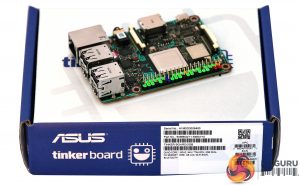 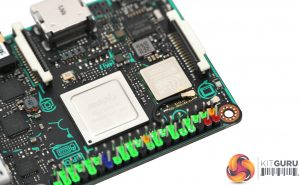 At first glance, the ASUS Tinker Board is a spitting image of the Raspberry Pi 3, with all the ports and headers in exactly the same places on the PCB. This is presumably so that the same casings, shields and peripherals can be used.

The Rockchip RK3288 SoC comes bare, and the system will actually boot and run like this. However, ASUS also includes a passive heat sink in the box, which sticks over the Rockchip to ensure that it doesn’t overheat. 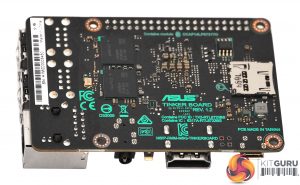 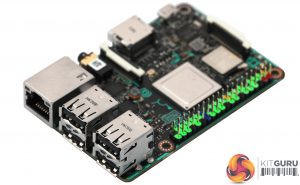 The main feature on the bottom of the PCB is the slot for the MicroSD card. ASUS recommends at least 8GB capacity for installing an operating system, applications, and your own custom code. 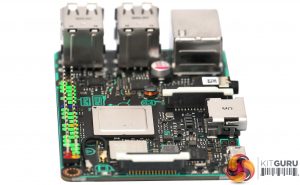 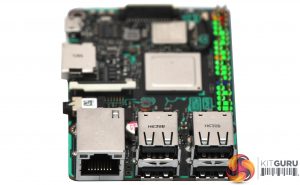 Just like a Raspberry Pi 3, one end sports the four USB 2.0 ports and LAN, although the latter in this case is Gigabit Ethernet. Nestling between the USB and LAN are bare connectors for S/PDIF digital audio, although you will have to solder your own wires to these. The other end is where the 15-pin DSI header for serial-connected displays resides. 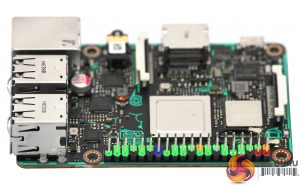 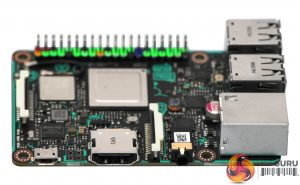 On the longer edges, one is host to the 40-pin GPIO header for connecting sensors and outputs such as LEDs. The configuration appears to be identical to the Raspberry Pi 3, which isn’t likely to be a coincidence.

On the other longer edge there’s the Micro USB connection for providing power, which should be 5V 2A. You need this much, too. We tried a USB port that didn’t supply this much power and the Tinker Board wouldn’t boot. Next along is full-sized HDMI connection with support for 4K screens at 60Hz, although this depends on operating system capabilities.

Alongside the HDMI port is the 15-pin CSI connector for serially-attached cameras. Then there’s a stereo minijack that, in tandem with the Realtek ALC4040 codec, allows audio output up to 192KHz and 24-bit resolution. The minijack also happens to be a combo, so supports a microphone input as well. 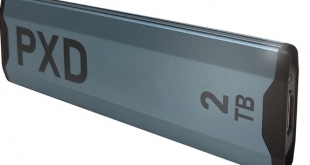