One of the selling points of the ASUS Tinker Board is its performance, so we ran Geekbench 4 on TinkerOS Android (since we were able to install it…) to see how it shapes up. Geekbench contains a range of synthetic tests that are designed to simulate the kind of loads you will encounter during everyday tasks. The CPU test outputs a single-core and a multi-core result.

The GPU test uses the Android RenderScript API to assess graphics performance. Although the test is synthetic, RenderScript is the API that Android devices use to accelerate 3D rendering and CPU compute tasks, so testing it gives a good assessment of graphics ability with real Android apps that use GPU acceleration. 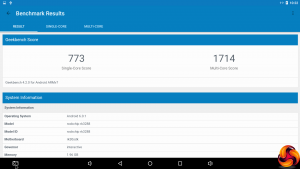 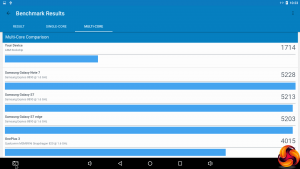 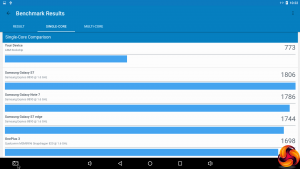 The Geekbench CPU scores of 773 single-core and 1,714 multi-core don’t really compete with the latest high-end phones, but then this is a sub-£50 board and these devices cost 5-10 times as much, albeit with lots of extra bits included like a high-resolution screen. The real comparison is with the Raspberry Pi 3 Model B.

We didn’t have one to hand, but plenty of Geekbench 4 results are available on the Geekbench website’s results browser, so here is one of the best we could find: 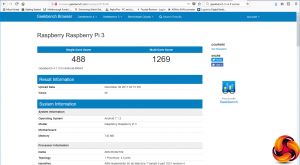 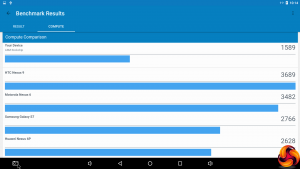 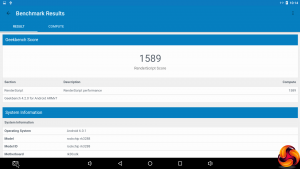 The RenderScript score of 1589 is similarly behind top-end smartphones as the CPU score. But it’s not so far behind to rule the Tinker Board out from being able to run GPU-accelerated Android games. The Samsung Galaxy S7, for example, is 74 per cent quicker. That’s significant, but not necessarily a deal breaker.

We couldn’t find a Raspberry Pi 3 RenderScript score for comparison. In theory the Android Things build that is built for the Pi 3 will run RenderScript, despite its GPU not having explicit support, but we haven’t discovered any performance results using it yet.