With Intel’s Comet Lake CPUs expected some time later this year, the first 3DMark results have emerged purporting to show how the upcoming 10-core i9-10900K performs in these benchmarks. Compared directly to AMD’s Ryzen 9 3900X, 3DMark Physics scores are essentially the same between the two processors.

According to Notebookcheck, 3DMark scores are more affected by high clock speeds than by core/thread count. Even so, the values spotted by Twitter user _rogame for both Time Spy and Fire Strike benchmarks show that the higher clocks of the Intel processor were not enough to beat the 12C/24T 3900X. Intel’s 10900K can boost its clock speed up to 5.1GHz, while AMD’s 3900X can “only” hit the 4.6GHz mark. 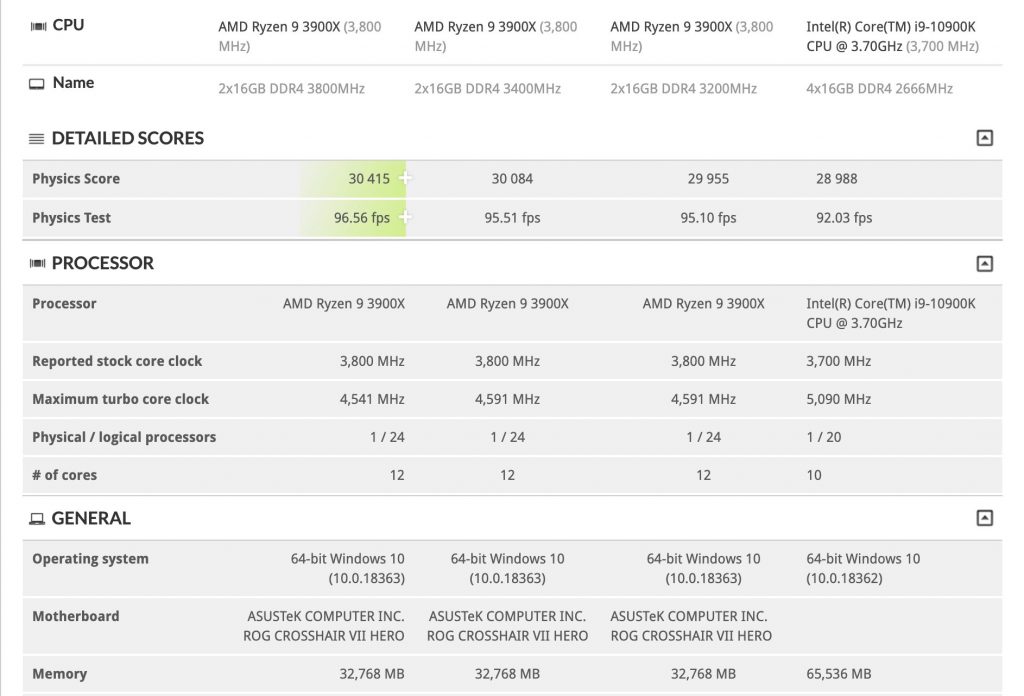 With Time Spy, which may have some issues scaling above 10 cores, the Ryzen 9, running the lowest memory speed configuration, was able to score 12857, while Intel’s CPU scored 13142. The Ryzen 9 could only beat the Intel processor when using higher speed memory configurations, scoring 13193 with 3400MHz memory and 13650 using 3800MHz memory.

Based on these results, which are not by any means decisive, Intel’s improvement over 9th gen could be up to 25% in Fire Strike (the 9900K scored around 24-25K in Fire Strike), which is predictable given that the core count has increased by the same percentage. Using Time Spy the improvement is less significant given that the 9900K scores around 11K. This translates into a performance improvement of 15% when comparing the upcoming Comet Lake processor with its predecessor.

KitGuru says: After considering these results, do you think Intel 10th-gen Core processors can fight with AMD Ryzen 3000 series?