A chart from MSI confirming the specifications of the upcoming Rocket Lake-S processors has been leaked. The chart appears to be part of a 500-series motherboard presentation and contains the core configuration, operating frequencies, L3 cache, and TDP of Intel's 11th Gen Core “K” processors.

Further detailing the Intel Core i5-11600K, this mid-range processor comes in a 6C/12T core configuration, with 12MB of shared L3 cache and a base clock of 3.9GHz, boosting up to 4.9GHz through Intel Turbo Frequency technology. 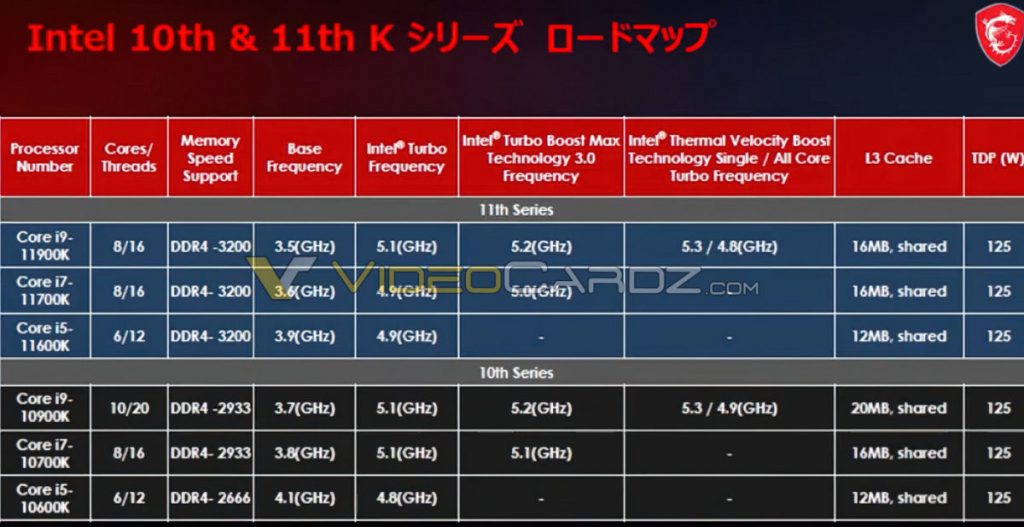 Lastly, there's the Core i9-11900K. Just like the i7-11700K, it has 16MB of shared L3 cache and an 8C/16T core configuration. The base clock is slightly lower, set at 3.5GHz, but it can boost up to 5.1GHz through Intel Turbo Frequency, and 5.2GHz with Intel Turbo 3.0 Frequency. Unlike the other two processors, the Core i9-11900K features Intel Thermal Velocity Boost technology, allowing it to clock up to 5.3GHz in a single-core and 4.8GHz on all cores.

Intel Rocket Lake-S processors are expected to release in March 2021.

KitGuru says: Do you think Intel 11th Gen Core “K” processors will be worth considering for a new build? How will they fare against the Ryzen 5000 desktop processors?