AMD has been pretty quiet as far as release dates go when it comes to the first mainstream desktop Zen CPUs. We have heard dates ranging from ‘October 2016’ to ‘early 2017’ but this week, what appears to be a leaked AMD CPU roadmap update appeared online, which seems to show the planned release schedule.

The updated roadmap slide first appeared on the SemiAccurate forum, and it seems to show AMD’s release plan for 2016-17 and 2017. According to the slide, AMD will only be releasing Bristol Ridge on the AM4 platform this year, which features four ‘Excavator’ cores and 8 GCN cores. Then in 2017, we will be getting the first Zen CPU known as ‘Summit Ridge’. 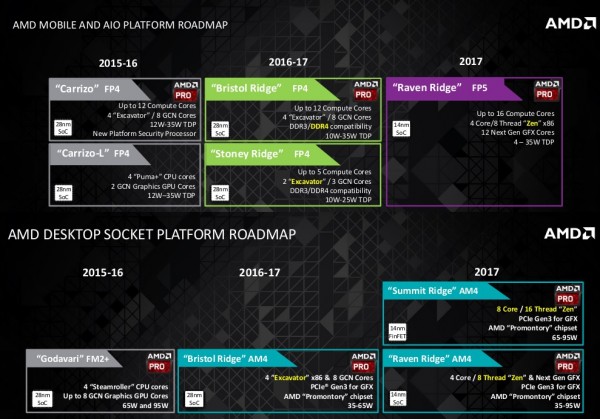 Summit Ridge will be the 8 core/16 thread Zen CPU that we have been hearing about for so long. Then later in the year AMD is said to be releasing ‘Raven Ridge’, which will be a 4 core/8 thread Zen CPU, which has also been talked about in previous leaks and rumours.

This all follows on from a report earlier this year, when AMD’s CEO told investors during an earnings call that Zen CPUs may be available in limited quantities towards the end of 2016, with a full rollout scheduled for early 2017. This leaked slide doesn’t mention Zen CPUs for 2016 but perhaps some people will manage to get their hands on one early.

KitGuru Says: As with all leaks, we won’t know just how accurate it is until we hear some official information so for now, be sceptical. That said, signs do seem to be pointing towards Zen in 2017 now. Are any of you waiting on the launch of Zen CPUs? Would you wait until 2017 to pick one up?

Previous Sony is holding an event next month, will likely reveal PS4 Neo
Next Seagate one-ups Samsung with a 60TB SSD

Today Intel has revealed its roadmap of process and packaging improvements, which will power the next several generations of Intel CPUs leading up to 2025 and beyond. This includes Intel's first new transistor architecture in more than a decade.