Just recently, Samsung’s massive 15.6TB SSD began selling at retailers for $10,000. The 15TB drive was impressive at the time, but now it looks like Seagate is stealing the limelight with the announcement of its 60TB SSD.

Seagate showed off its massive SSD at the Flash Memory Summit this week, though it was only there for demonstration purposes, so it isn’t really a full-blown product just yet and likely still needs some work. 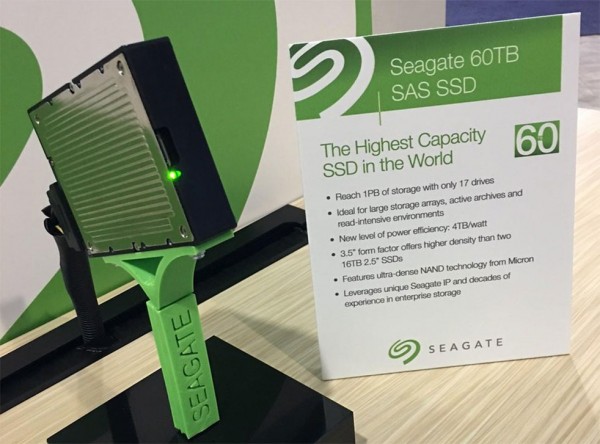 As PCworld points out, if Seagate can deliver on this, then its SSD would be four times larger than the current largest SSD in the world, Samsung’s PM1633a, the $10,000 15TB drive. Much like Samsung’s offering, the Seagate 60TB SSD is a SAS drive in a 3.5-inch form factor. It isn’t really for consumer use but would work well for server use, where you can double down on mass storage and save on rack space.

The exciting part is that this drive is based on a “flexible architecture” and could end up scaling to support 100TB of storage in the same form factor, according to the official announcement.

KitGuru Says: There have been a lot of developments in the SSD world recently. I thought 15TB of space on the Samsung drive was impressive but 60TB just blows that out of the water and the potential for up to 100TB of space on Seagate’s drive is really pushing the envelope.