Just a few days ago we got out first look at early benchmarks of Intel’s upcoming Kaby Lake Core i3-7350K processor, which actually managed to stack up well compared to the Haswell Core i5 4670K. Now just a few days later, some more benchmark numbers have surfaced, this time for the Intel Core i5 7600K and the Core i7 7700K, both of which aren’t set to release until early 2017.

Just like with the 7350K, these results were found through Geekbench, with the Core i5 7600K running on a Gigabyte Z270X-Gaming 5 motherboard and the Core i7 7700K running on an ASUS Maximus IX Hero. Neither of these motherboards have been officially announced yet and obviously, the CPUs themselves aren’t out just yet, so these numbers could differentiate slightly from the final product but given how close we are to CES, these results should be a good indicator. 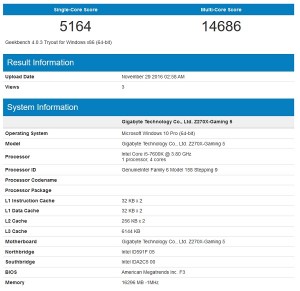 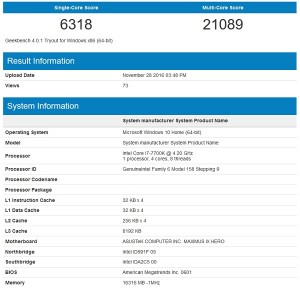 The Kaby Lake Core i7, on the other hand, was running at 4.2 GHz and managed a single-core of 6318 and a multi-core score of 21089, which does appear to be an improvement over recent Skylake 6700K results.

These are all early indications of performance for now but we are due to get our first look at Intel’s new desktop line of Kaby Lake processors in January, so it won’t be too long before we get to see the final product in action.

KitGuru Says: There have been quite a few Kaby Lake leaks recently to keep on top of but now it looks like we can start to get a decent idea of what performance to expect. Are any of you planning a Kaby Lake build in 2017? Will you be sticking with an older generation, or perhaps switching to AMD’s upcoming Zen platform?

Previous Watch Dogs 2 lands on PC, AMD and Nvidia drivers updated
Next Ofcom wants to split up BT and Openreach