It looks like people are starting to get their hands on close to if not completely finished Ryzen processors as third-party benchmark numbers are now starting to leak. We have previously seen some benchmark leaks for engineering samples of Ryzen and we have seen a few cherry picked performance examples from AMD itself but with the processor now just a month away, real world users are going to start getting their hands on it.

This particular leak comes from the Ashes of the Singularity database, similarly to our Vega performance leaks a few months back. This also happens to be where we first saw performance numbers appear for Ryzen engineering samples back in August 2016. The specific benchmark listing has been pulled but not before a screenshot was taken and posted to an asian forum site. 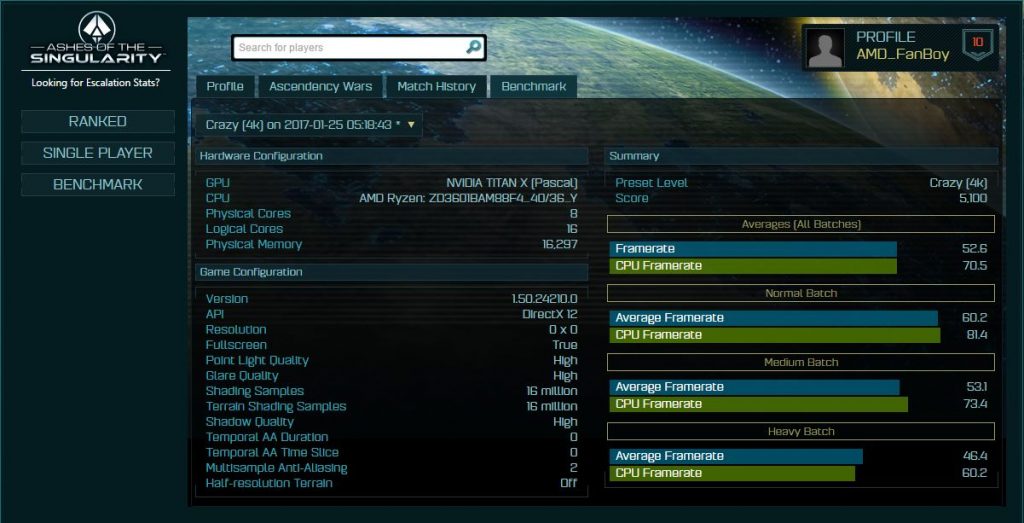 As you can see, this particular system was running an AMD Ryzen ‘ZD’ CPU, which is in contrast to the earlier ‘ES’ samples we saw last year. This sample has eight cores and sixteen threads clocked at 3.6GHz with a 4GHz turbo boost.  The system here also featured 16GB of RAM and an Nvidia Titan X (Pascal).

The benchmark was run at the ‘Crazy’ 4K preset and as you can see, the average CPU frame rate from the three tests is 70.5 frames per second. You can make various comparisons by looking at other public benchmarks in the AoTS database but I would wait until Ryzen has been put through its paces by more people across a wider range of benchmarks before drawing any conclusions.

KitGuru Says: It is always interesting to get some early performance numbers. This time around, we are much closer to Ryzen’s launch so I imagine this sample is close to if not the exact final product coming in a months time.