In a somewhat confusing move, this week Intel confirmed that its next 8th generation Core processors would remain on the 14nm node, despite previously saying that it would have 10nm ready to go later this year. Speaking at its annual investor day in California, Intel spoke about its plans for 8th gen, adding that it would be sticking with 14nm for its mainline CPUs for the fourth year in a row.

Earlier this year we saw the launch of Kaby Lake, which was the ‘Optimization' step in Intel's new three-stage ‘Process-Architecture-Optimization' release schedule, which replaced the old Tick-Tock cycle last year. By returning to 14nm for 8th generation, it seems that a fourth step is being added to Intel's cycle. 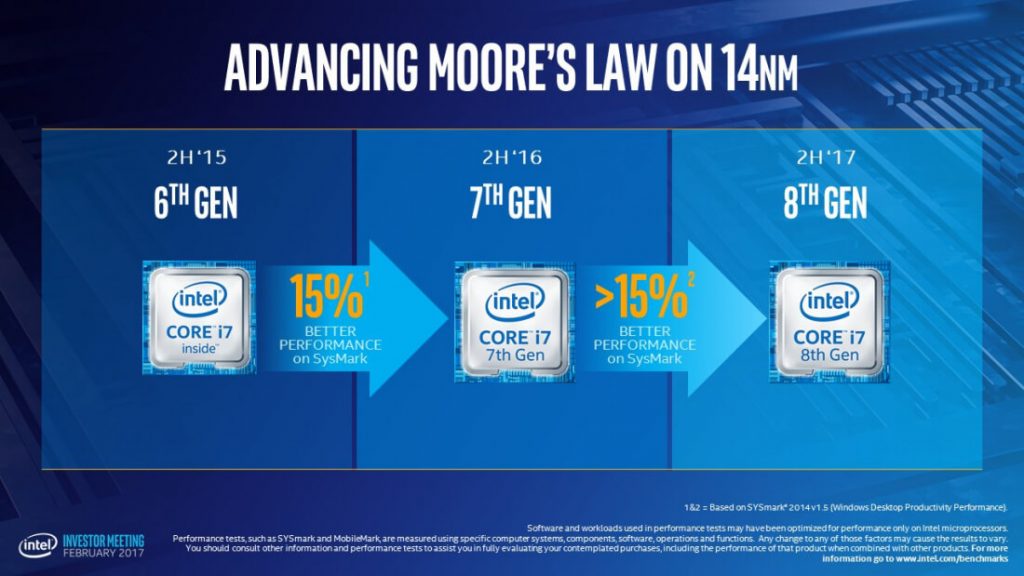 Due to this, Intel's 8th generation line up could be quite messy to figure out. 10nm Cannon Lake CPUs are now believed to be part of the Y-series for ultra low-power devices, meanwhile Coffee Lake will remain on the 14nm process and may form the rest of the 8th-generation line-up for laptops and eventually desktops.

Aside from that, Intel expects its 8th generation CPUs to be around 15 percent faster than Kaby Lake. We should start to hear more towards the second half of this year when Intel starts rolling out new processors. One thing is for sure though, as confirmed by Anandtech, Data Centers will get access to new nodes first.

KitGuru Says: It looks like desktop users will find themselves stuck on 14nm for another year, which does make me wonder how much of a boost we can really expect when going from 7th gen to 8th gen.