We have been hearing bits of information regarding Intel’s next micro-architecture update for a while now. We are expecting the first ‘Coffee Lake’ CPUs to hit the DIY desktop market in 2018 but it seems those hoping to upgrade and keep their current motherboard may be out of luck. According to ASRock, Intel’s upcoming Coffee Lake chips won’t support 200 series motherboards.

Intel introduced socket LGA1151 around two years ago with Skylake. This socket carried over from Z170 to Z270 and with Coffee Lake being another 14nm increment, it was assumed that the socket would carry over once again. If what ASRock is saying is correct, then that won’t be the case. 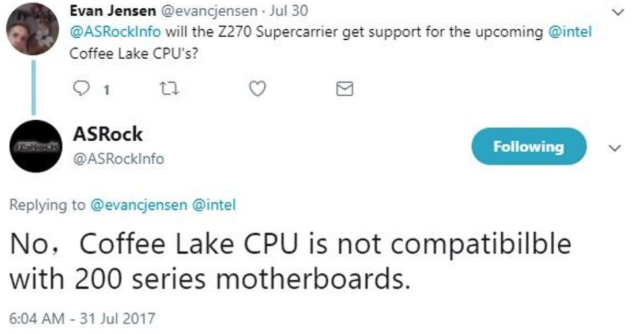 Over on Twitter, someone asked ASRock directly if the Z270 Supercarrier motherboard will get support for upcoming Coffee Lake CPUs, to which the company replied: “No, Coffee Lake CPU is not compatible with 200 series motherboards”. That tweet is now deleted but there is a screenshot of it above.

We already know a fair bit about Intel’s Coffee Lake plans. Back at Computex, Intel promised a 30 percent performance boost with its 8th generation processors. Aside from that, we have also heard rumours that these new chips will bring more cores to mainstream offerings, with new Core i5s and Core i7s jumping to six-core designs with a 95W TDP.

Anyone looking to make the jump though may want to budget for a new motherboard too. There is the possibility that whoever is in charge of ASRock’s Twitter account got the wrong information but switching to a new socket wouldn’t exactly be out of the ordinary given Intel’s track record.

KitGuru Says: Most people buy a CPU/Mobo/RAM combination and stick to it for years. However, if you are the type of person that likes to swap to a newer CPU more regularly, then I imagine also having to budget for a new motherboard can be frustrating.